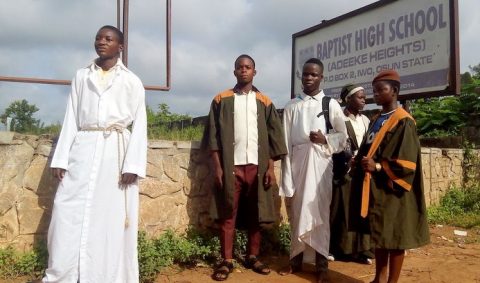 The Osun State chapter of the Christian Association of Nigeria had earlier vowed to order Christian students in public schools to wear church garments to school if Governor Rauf Aregbesola goes ahead to implement the judgement of the state’s High Court giving legal backing to the wearing of hijab to school. Justice Oyedeji Falola of the Osun State High Court, Oshogbo, gave the ruling on 3rd June, 2016.

The Muslim Rights Concern (MURIC) condemns this hocus pocus. It is a manifestation of impunity of the highest order. Osun chapter of CAN has turned the judiciary into a laughing stock.

It is rather unfortunate that a religious body of the caliber of CAN has disrespected the judgement of a high court granting Allah-given fundamental human right to female Muslim students to use hijab. Nigerians can now see the true face of religious fanaticism. Something is fishy if Muslims take a case to court instead of going violent or even demonstrating and Christians now take the law into their hands. This is highly provocative.

MURIC has always maintained that violence and terrorism must be traced to provocation simply because there can never be smoke without fire. The cause-effect theory must be properly examined before apportioning blames.

Hijab is used freely in all public schools in the North because the Nigerian law allows its use. But the picture is different in the South where school authorities act a script written by CAN. But to be or not to be? That is the question. The court has made a pronouncement. We must decide who calls the shots: Osun CAN or the judiciary.

This is a very dicey situation and we call on the government of the State of Osun and the state’s police command to do the needful. The Muslims have obtained a favourable judgement and anyone who stands in the way of its implementation must be thoroughly dealt with.

Osun CAN executive is guilty of child abuse. They are using innocent children to commit illegalities. Those underaged children are being goaded to lawlessness by those old enough to be their grandfathers. What kind of legacy are those elders leaving behind? How can thuggery, hooliganism and impunity of such magnitude be encouraged among secondary school students?

Have we found any solution to cultism in schools yet? We should not be surprised if those children who wore church garments to school beat up their teachers in future. Neither should we look too far for their sponsors. At least it is now on record that CAN executive have ordered indiscipline in public schools.

But we will not lose our heads in spite of this provocation. We call on Muslim students, Muslim youths in general and Muslim parents to remain calm. They should allow Nigerians to watch and fully enjoy this theater of the absurd without being dragged into the list of the dramatis personae.