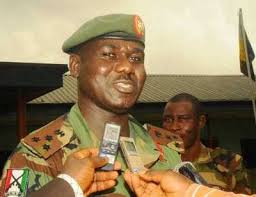 ABUJA, NIGERIA (AFRICAN EXAMINER) – The Chief of Army Staff Lt. Gen. Tukur Buratai, has alleged that Boko Haram insurgents were being supported by some elements and other international terrorist bodies like the so called IS.

COAS made the allegation Monday, while addressing journalists after formal declaration of a seminar on insurgency in Abuja.

While paying tribute to the late Commanding Officer of the 272 Task Force Battalion, Lt. Col. Muhammad Abu Ali, Gen. Buratai described his recent killing as tragic, reasoning that the sad incident called for a national and global solution to check act of terrorism in the country.

The loss, Gen. Buratai regretted was too many such that a collective effort by all Nigerians and world is made, so as to ensure that terrorism ‘’is seriously fought to the end’’. He added that all stakeholders must work and synergize together.

He charged Nigerians to cooperate with the government and Army in the campaign against insurgency, assuring that late Abu Ali who has been buried at the Military cemetry, would not die in vain.

COAS stressed that it is incumbent on every Nigerian to reflect and understand that the country is in a situation where there was need to ensure that the fight against insurgency received total support from everybody.

The seminar which has the theme ‘’Assessing the threats of Boko Haram insurgency in Nigeria’’ held at the Nigerian Army Resource Centre, Abuja.