Serious crisis is now brewing in the apex Igbo socio-cultural organization, Ohanaeze Ndigbo, as the women wing of the body has vowed to resist imposition of delegates to the proposed national conference CONFAB scheduled to begin in March. 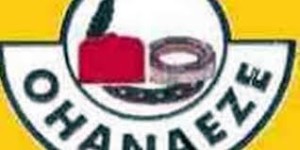 The former president of Council of Women societies in Enugu state, substantiated her allegation by citing a women’s meeting summoned by the duo of Igarawey and Nwogu yesterday (Monday) at the secretariat of the Igbo Umbrella body in Enugu where prominent women members of Imeobi (caucus) Ohanaeze including herself were excluded.

She therefore vowed that Igbo women would mobilize for a protest against the selection by the Ohanaeze chieftains if their conspiracy comes to fruition.

She also alleged that Ohanaeze women group had already elected their leaders, which the Ohanaeze men leaders have failed to recognize.

Okwor, noted that it was because of the leadership crisis in Ohanaeze Ndigbo that made the Prof. Ben Nwabueze-led Igbo Leaders of Thought compose of eminent personalities in Igbo land to articulate items of discussion at the proposed conference, adding that Igbo women supports the position of the Nwabueze group.

The woman leader, therefore, urge Governors of the South East geo-political zone to be involved in appointing delegates from the area for the conference.

She also opined that Nigeria should go back to parliamentary system of government, noting that the present presidential system is not only costly but characterised with corruption.

Hear her: “There is also so much power concentrated at the centre. Power should be devolved to regions or zones,” she suggested.

“We did not agree with the PAC report because what we need in Nigeria today is a new constitution and not a military constitution that we are currently operating.

We have agreed to be at the conference despite the modalities but we don’t want another jamboree in the name of national conference.

“Now that Ohanaeze has problem, we asked Nwabueze to call everybody together to harmonize views to be presented at the conference.

After articulating  the Igbo positions, Igarawey was invited to sign the document but he refused.

“We have people of integrity in the Igbo Leaders of Thought and I don’t understand why Ohanaeze cannot support it. We agree that Ohanaeze is the apex Igbo body even though there are other Igbo bodies but the Ohanaeze leadership has to be right.

“We won’t boycott the conference but we women want to support what will benefit our children. We the Igbo women in Ohanaeze are in support of Igbo Leaders of Thought under Prof. Ben Nwabueze. I will lead the protest against Ohanaeze if they try to exclude us.” She vowed.