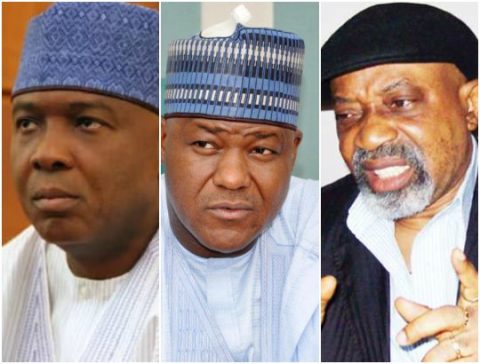 In what appeared to be a pre-planned display, the workers from the take-off of the rally, began the protest against the present minimum wage of N18,000 and demanded for its upward review.

They expressed their grievances, contending that the present minimum salary was grossly inadequate, especially in view of the raging economic recession as well as decline in the Naira value, which have increased the cost of living in different parts of the country.

The workers who complained that they were being deceived severally by the successive Governments were further enraged due to the absence of President Muhammadu Buhari and his Vice Prof. Yemi Osinbajo.

Again, tension mounted when the Acting Permanent Secretary of the Federal Ministry of Employment and Labour Mrs. Abiola Bawa came forward to read her Minister, Dr. Chris Ngigie’s address, despite his presence at the rally. She was rebuffed.

However, when the Minister mounted the podium to present President Buhari’s address, the protesting workers insisted that he must read his address by himself, and not by any representative, since he was at the rally.

As the confusion and stalemate ensued, the immediate past Edo State Governor and former Nigeria Labour Congress (NLC) National President Comrade Adams Oshiomhole came out to address the angry workers and pacify them, but to no avail.

The situation made the workers and security personnel clashed, a situation that made the scene to be further charged.

The rally was attended by the President of the Senate, Bukola Saraki and Speaker, Rt. Hon. Yakubu Dogara.