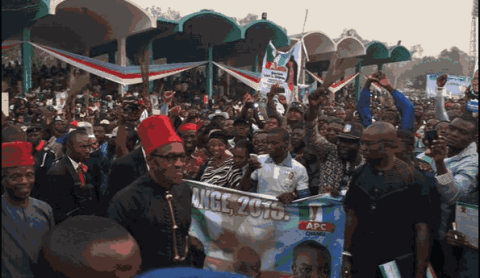 From Ignatius Okpara, Enugu – Ex- Head of state, and All progressive Congress, APC presidential candidate for the 2015 election, Mohammadu Buhari, has warned that “if Nigerians don’t kill corruption, Corruption will kill Nigeria” 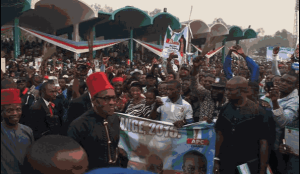 He said the present alarming rate of corruption under the Peoples Democratic party, PDP led administration in Nigeria should be a source of worry to every patriotic citizen of Nigeria.

warned that Nigeria would be in trouble if the Peoples Democratic Party, PDP, remained in power after the 2015 elections.

Meanwhile, Enugu, the capital of Enugu state, was agog before the arrival of the retired Army General,s campaign train.

It came Barely 24 hours after President Goodluck Jonathan attended a similar rally in Enugu on friday.

The APC flag bearer and his campaign organization, were highly impressed with the mammoth crowd, both young and old, at the Michael Okpara square, venue for the rally.

They had earlier in the day visited Anambra State, before storming Enugu, in a carnival like manner.

Addressing the overwhelming crowed at the rally, Buhari said, “If you make a mistake to allow PDP to rule again for the next four years we will all be in trouble”,

He however, stressed the need for the electorate to collect their permanent voters cards PVCs in order to ensure that the PDP was voted out.

The APC, candidate, had Promised to invest in agriculture, industries and security, if voted into power, adding that the insurgency in parts of the Northern Nigeria, was just terrorism,

He noted that “for anybody to go and kill people in churches, in mosques, in motor parks and shout ‘Allah’, he is saying what he don’t believe.

He promised to “revamp the coal industry” in Enugu, and also ensure regular power supply in the country.

In their separate speeches, Governor Okorocha of Imo state, and Senator Chris Ngige, had urged the people of the State not to be deceived by the PDP.

They insisted that the future of Igbos, remains brighter in the opposition APC, hence the people should embrace it.