A man identified as Babatunde Oni was arraigned before an Ikeja Magistrate Court on a one count charge of recklessly driving in a manner dangerous to the public thereby causing the death of one Emmanuel Joseph Ishola who was walking along Ajao road, off Adeniyi Jones road, Ikeja, Lagos, on the 2nd November, 2013. 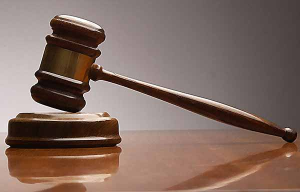 The defendant on the said date was driving Honda Accord car with registration number ER631LND.

Speaking on behalf of the deceased relatives, the defense counsel, Derinade Yusuf informed the court that the relative of the deceased is not interested in prosecuting the defendant.  Prosecutor Unuigbe however said that he is not aware of the development.

The first daughter of the deceased, Adesanya Bola was called as a witness, and reiterated the family’s unanimous decision to withdraw the case from court. While speaking with African Examiner, Bola, who was close to tears, stated that the family does not want any trouble, hence the reason why they withdraw the case, “my father was coming from work that day he met his untimely death, but we do not want any trouble, that is why we are withdrawing the case” she said.

Magistrate Abimbola Komolafe struck out the case and discharged the defendant.