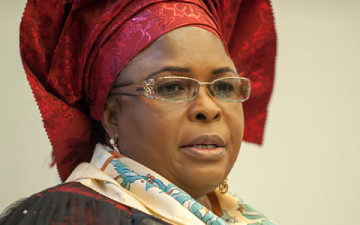 (AFRICAN EXAMINER) – A Federal High Court sitting in Abuja has dismissed a suit filed by the wife of the immediate past President, Mrs Patience Jonathan, in which she is praying for enforcement of her fundamental human rights.

Justice John Tsoho Tuesday in his ruling held that all the grounds of Mrs Jonathan against the Economic and Financial Commission EFCC lacked merit and not sustainable.

It would recalled that the former first Lady in her suit dated June 30, 2017, accused the EFCC of harassing her over her political views, thus arraigned the anti-graft body before the court.

In the suit, Mrs. Jonathan alleged that the EFCC invaded houses linked to her and subsequently obtained interim forfeiture orders against her belongings, including non-government organization as well as her family members.

Justice Tsoho however ruled in the contrary insisting that none of her (Mrs. Jonathan) rights, including rights to fair hearing, own property, family life, dignity of human person, and freedom from discrimination, allegedly being violated by the operatives of the EFCC, was not justifiable

Consequently, the jurist ruled that Mrs. Jonathan has failed to prove her allegations against the EFCC beyond the reasonable doubt, therefore, was not entitled to any of the six prayers, including N2bn damages contained in the suit, hence dismissed the suit.