COVID-19: Nigeria Not Ready For Reopening Of Economy 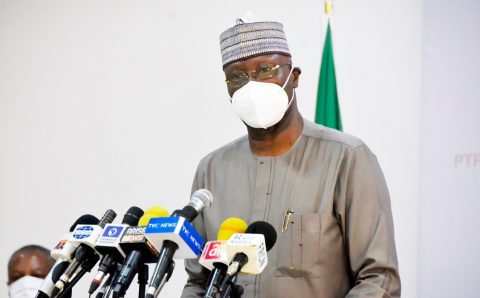 (AFRICAN EXAMINER) – The Federal Government said on Thursday that the country “is not ready for full-scale re-opening of the economy.”

The Secretary to the Government of the Federation (SGF), Mr Boss Mustapha, who is also the Chairman, Presidential Task Force (PTF) on COVID-19 said this  at the 63rd joint national briefing of the taskforce held at the International wing of the Nnamdi Azikiwe International Airport, Abuja.

The SGF expressed the PTF’s belief that while Nigeria is not ready for a full re-opening of the economy, there has been sufficient progress to warrant further relaxation of restrictions put in place to contain the spread of the virus.

“Based on the foregoing, the PTF today submitted its 7th Interim Report to President Muhammadu Buhari for his consideration and approval.

“The main thrust of the recommendation is that Nigeria advances to the third phase of eased restrictions with further amendments, to address economic, socio-political, and health concerns.

“This will last till a time when the epidemic is sufficiently controlled in Nigeria,” he said.

Mustapha said that President Buhari had considered and approved transition into the third phase of the National Response to the pandemic for a period of four weeks, with effect from 12.01am on Friday, Sept. 4, 2020 in line with amendments to address economic, socio-political, and health considerations reflected in the implementation guidelines.

He said that the President had considered the fact that the six-month mandate of the PTF would expire in September and had extended it till the end of December.

Mustapha noted that the global response had continued to witness huge deployment of resources and collaborative efforts to combat the pandemic and that the global statistics depicted the virulent nature of the virus.

According to him, the globally confirmed cases of the virus have exceeded 25 million (25,917,000 as of Sept. 2, and that since hitting the 15 million mark, numbers have been increasing by one million cases every three to four days.

“South Africa still has the highest case count in Africa but (this) has fallen from the fifth to the sixth position in the world.

“In Ethiopia, the numbers have been on the increase. Both South Africa and Ethiopia are of interest to Nigeria in view of the passenger traffic between Nigeria and the two countries and our plans to reopen the international air space,” the SGF said.

Speaking on global efforts on vaccine development and production, he said that the global community had made appreciable progress in that sphere and that as of Aug. 28, a total of 173 candidate vaccines had undergone evaluation.

“The PTF continues to monitor developments so that the country can benefit from the emergence of an effective vaccine,” he said.

Speaking on testing for the virus in the country, Mustapha said, “The PTF is particularly disturbed by the low level of sample collection because of what it portends for the strategy of testing, detection, tracing, isolation, and treatment.

“For example, in July, seven states reported lower number of samples collected than in the preceding month.

“But in August this number rose to 32 states. This illustrates that in spite of the increased diagnostic capacity and improved access to testing, the demand remains low with not enough samples being collected.

“Therefore, the recent reduction in cases in some states can be attributed to low testing.”

According to him, the taskforce has  continued to assess developments in the country preparatory to the determination of the next steps to be taken.

He also said that between August and September, the number of states with more than 1,000 confirmed cases had increased from 10 to 12, and the FCT.

He added that the Case Fatality Ratio (CFR) had consistently remained at 1.9 per cent, indicating improved case management, resulting in fewer COVID-19 deaths.

According to Mustapha, Nigeria now has  68 laboratories in the COVID-19 network, spread across 34 states and the FCT,

He said that the remaining two states – Kebbi and Niger – were  in the pipeline for coverage in the next few weeks.

Meanwhile, the number of cumulative samples tested has exceeded 400,000.

The News Agency of Nigeria (NAN) reports that the  taskforce held the briefing at the Abuja airport where the SGF, the Minister of Aviation, Hadi Sirika; Health Minister, Dr. Osagie Ehanire; Information and Culture Minister, Lai Mohammed; and Minister of State for Health, Sen. Olorunnimbe Mamora, among other top government officials, took a tour of facilities put in place at the airport to assess the level of preparedness for Saturday’s reopening of the country’s to international air travels.