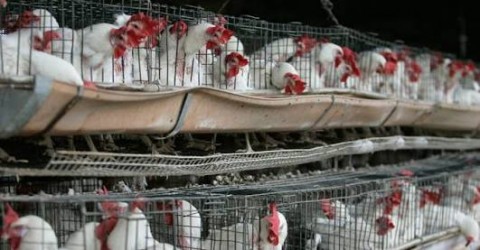 The Council’s Director General, Mrs. Dupe Atoki made this disclosure on Monday at a meeting with members of Poultry Association of Nigeria at the Council’s headquarters in Abuja.

Mrs. Atoki said the Council was adopting a three-pronged approach against the existence of the products, which she identified as including the sensitization of consumers on the dangers of the consumption of these products, removal of the products and collaboration with relevant stakeholders.

She pointed out that the Monday meeting was initiated as part of the strategies at forging necessary collaborations with the stakeholders, disclosing further that other engagements with relevant Federal Ministries and the Customs Service have been mapped out.

According to her, “we have invited the Poultry Association of Nigeria to speak with us and speak on the issues”, stating further “we are aware that they have commissioned a study on the hazards and health implications of imported poultry products.

“We have invited them to share with us, so that together we can have a holistic roadmap to engage the sector, and to bring to table of all Nigerians products that we know are safe and not hazardous, and products that will be made in Nigeria for Nigerians.

“They are also to brief us on their suggested way forward in ensuring that these products are removed from the market, and their capacity for local production to bridge the gap” she asserted.

On the enforcement activities, Mrs. Atoki said the Council was willing to collaborate with the association to get necessary intelligence on sources of the importation of these banned products, cold rooms/ storage facilities, distribution outlets/chains including markets, supermarkets, eateries, while enforcement strategies would be mapped out.

She stated that the Council’s decision became inevitable because the existence of these products was not only causing health hazards to the country’s citizens, but also constituting an economic sabotage.

The CPC boss added: “It bothers not only on health; it bothers also on the economy of the country. As long as you continue to import products that can be made in Nigeria, we are diminishing the opportunity for employment in Nigeria”.

Speaking at the event, the President, Poultry Association of Nigeria, Dr. Ayo Oduntan, gave a pathetic state of the consumption level of these banned poultry products in Nigeria, claiming that “in Nigeria, since 2002, chicken has been banned and of the 1.2 to 1.5 billion tons of chicken consumed in this country, 800 to 1million tons of it are smuggled into Nigeria”.

Oduntan said his association’s agitation was not really about a “fight for the business of the poultry industry”, but to point out the hazards inherent in the consumption of the banned products.

He contended that to preserve the imported chicken “on its long voyage after storage for sometimes up to four years, it is infused with chemicals, the same that is used to embalm dead body. This chemical is a preservative. We are all aware of the very high incidents of all manner of diseases in Nigeria.

“We also have been told that these chickens, because of the chemicals used, once you put it in the mouth, it is not chewy. We have also been told that it is slimy to the touch, this is because the broken chain results in high levels of bacteria. A lot of what we say is typhoid, dysentery and diarrhea might have been caused by this high level of bacteria”, he said.

Oduntan added: “A study was conducted, which NAFDAC collaborated with and adopted, for which a press conference was held about four months ago. It was done by some university professors, and they actually took samples of chicken from Lagos, Ibadan, Abuja. They scientifically tested for presence of formalin and confirmed it in the chickens that they surveyed. They also confirmed the high incidents of toxins, of cadmium and some other chemical toxins. They also confirmed the presence of high levels of antibiotic residues. Some of the antibiotics are not even known in Nigeria yet. The danger of that for the future is also highlighted.

“This is what we are eating. For most of us that grew up eating local chicken, eating chicken produced in Nigeria, even if we are not eating it now, half of our lives have been used. But for the little children, who from the two or three years old when they develop teeth, they have been eating this chicken and they are going to eat it for the next 40, 50 or 70 years. I am quite concerned about the implications of this on their health. It is for us, therefore, more than a campaign about selling chicken. It is for us a campaign about how we are going to safeguard the health of the nation” he noted