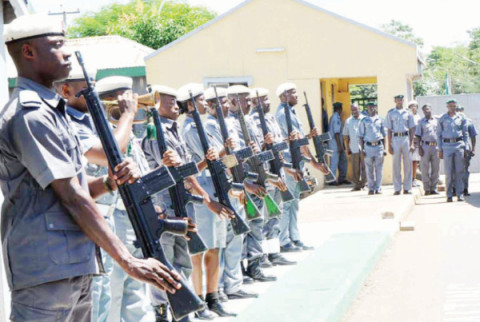 Determined to rid the zone C of the Federal Operations Unit of the Nigeria Customs Service NCS Owerri, of smugglers, authorities of the establishment say they have recorded a total of 155 seizures of goods valued  at 675 million naira,  between January and June this year in states within south east and south- south zones.

Customs Area Controller of the Unit, Victor David Dimka, dropped the hint Friday in Benin while displaying some of the contraband items seized at the premises of the Customs Government Warehouse House in Benin, Edo state.

The Controller also disclosed that a total of 19 suspects were apprehended in connection with the seized items.

He added that 24 cases were already in court, stressing that if they are found guilty, they would face the full wrath of the law.

The seizures, were made in Benin, Agbor, Asaba, Owerri, Enugu, Port-Harcourt and Calabar.

Dimka, listed the seized items to include a truck with 600 bags of 50kg wheat flour and 150 gallons of empty rubber jerrycans and drums; which were deceitfully used to conceal 492pieces of 225/65/R15 used car tyres.

The tyres, he noted pose severe danger to commuters and other road users as they were all usually expired.

He said “The driver of the truck has also been apprehended and charged to court. In addition, a truck carrying over 1,200 cartons of foreign soap and another truck also carrying bags of imported rice were intercepted”

Dimka said, although some of the drivers of the seized vehicles are still at large; but his unit has spread its tentacles to track them down wherever they might be hibernating in line with the renewed efforts of the Nigeria Customs Service to drastically reduce smuggling in Nigeria to the barest minimum.

“Some of these seized vehicles were taken in as abandoned seizures because their drivers absconded at the point of arrest. But they will be fished out through our intelligence network and we will subject them to the full weight of the law.”he stated.

“I feel so sadden when people cannot use their money for something meaningful and beneficial to themselves and their families instead of resorting to smuggling which is injurious to the economy of any nation including our dear country Nigeria”, the Area Controller said.

He regretted that desperate Nigerians are bent on circumventing the new automobile policy of the Federal Government by smuggling in vehicles, warning that smugglers who run away when their vehicles are impounded will also be traced, arrested and tried accordingly.

“The smugglers should note that the NCS is better equipped today to tackle such challenges and many more. We seized 51 cars and 26 jeeps in just short period of time in a large number. “I therefore commend individuals and sister agencies who supplied some information that eventually led to the seizure of some of these items and I enjoin you to sustain the spirit in the interest of the nation.

“I also appeal to members of the public with useful information about the activities of the smugglers to always make them available to our unit for necessary actions.

” I assure you that such classified information will be treated with the absolute confidentiality they deserve”, the Controller assured