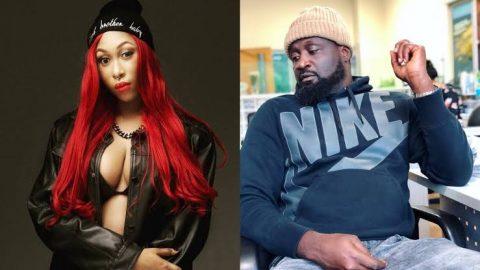 (AFRICAN EXAMINER) – Nigerian Reggae and Dancehall star, Cynthia Morgan, has disclosed why she stayed away from the spotlight and according to her; it was due to sickness and some family issues.

Before now, some participants in the micro blogging scheme have always asked for her whereabouts, there was even a time when “Being back Cynthia Morgan” trended and the number one advocate for the return of Cynthia Morgan, Sandra Ogbebor, recently interviewed her on Instagram live and the dancehall queen revealed that she is no more with the Square records and that she has had to battle with depression.

She stated that it was not easy working with Jude Okoye, when she was at Square records and she couldn’t have access to her social media handle and also stage name, Cynthia Morgan, can’t be used but Madarina.

It will be recalled that Square Records used to be owned by Peter and Paul of P Square alongside their older brother, Jude ‘Engees’ Okoye.

The twins fell apart in 2017 and Cynthia Morgan had a choice to make and according to Peter, he tried to reach out to Cynthia Morgan when he was exiting for her to join her label but the dancehall queen did not accept the offer.
Peter who took to his social media account to explain wrote: “And some people thought I was stupid when I made the right decision [to leave Paul and Jude]. My dear C Morgan! it’s never too late to be what you might have been. God will surely see you through and carry you through the storm. Keep believing”.

He added: “My dear C Morgan, the decision I made 3yrs ago was never about the [fame], money or power! It was for my FREEDOM! Sad you rejected the contract i gave u. Just because they made you see me like the bad egg. I pray you understand that God has a purpose for everything. Never give up.

“The Truth shall prevail. God will surely see you through C Morgan… Gnight.”
In related development, former record label boss, Joy Tongo , has called the dancehall queen a liar and that her nasty attitude was the reason why her career was jeopardized stressing that the singer was owing over $30, 000 to the record label.

Tongo wrote: “Cynthia Morgan this is 2020, we haven’t forgotten all your dirt! Internet does not lie, emails does not lie and much more. I am coming for you! All the dirt you did to I and Jude and others you must pay this time around. Is over 4 years and you are still talking trash!”

“Record Label /Management are not a charity organization. As Cynthia Morgan’s formal manager from 2011-2016 who have never spoken out, I can boldly say No one killed your career.

Your Pride and your nasty attitude was your downfall. You used your own hands and mouth to kill your once bubbling career. Since you can’t own up to your downfall of your music career and you are now trying to get people to have sympathy for you after 4 years, let me remind you shortly.”