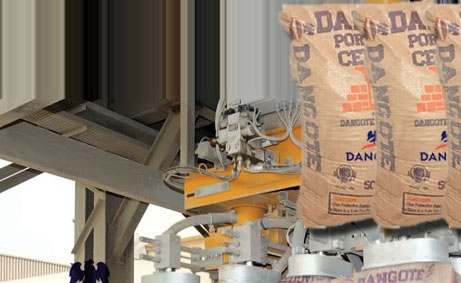 Amidst expression of surprise in the market, the Management of Dangote Cement Plc at the weekend assured that it would evolve a monitoring process that will ensure that profiteers do not hijack the new price cut so that it would benefits the end users of the commodity.

Speaking in Lagos while unveiling its new cement bags redesign in line with the demand of the Standard Organization (SON), the Group Managing Director of the Company, Mr Devakumar Edwin, explained that the new price regime was introduced in the best interest of Nigeria and her citizens who have all along been looking forward to it as manufacturers continued to increase their production capacities to meet and surpass national consumption need.

He said the price crash is as the company’s contributions to supporting the Federal Government’s quest to reduce the overwhelming housing deficit in the country andssed the hope that the development would go a long way into assisting in this regard.

Edwin pointed out that reduction in the price of building materials, particularly cement, which is within the company’s control is one of the strategies of reducing housing deficit.

The nation’s foremost cement manufacturer also unveiled its new product 32.5 cement grade as well as the new packaging as ordered by the SON for clear distinction among the various cement grades.

Said he;”As part of our efforts to make cement affordable to the ordinary Nigerian, we announced a price slash on all our products, last Friday. The new prices, which are exclusive of Value Added Tax (VAT), represent about 40 per cent discount on the prevailing market price, currently hovering around N1, 700. Consequently, a 50 kg bag of 32.5 Grade Dangote Cement, now sells for N1, 000, while 50kg of the 42.5 Grade goes for N1, 150. It has always been our desire at Dangote Cement Plc to reduce the price of our products to enable many more Nigerians to build their own houses.”

Giving customers hope of sustaining the downward review in prices, he said, “Dangote Cement Plc will continue to appraise its pricing regime in Nigeria’s best interest, from time to time. We are an ethical organization and we believe in putting our customers first, before profits. We believe in creating value for all our stakeholders in a sustainable manner. We will continue to pursue this philosophy.”

Edwin also debunked the claim in some quarters that the new standardization in the cement sub-sector will lead to job loss pointing out that if anything it would lead to job creation. “We were not producing 32.5 before but because of the standardization, which comes with the need to offer all our customers the benefit of choice from out bouquet of products, we have introduced it. That is more work for more people.”

Dangote Cement, according to him is on course towards consolidating its leadership position on the continent. Before the end of the year, the company will commission four new cement plants in Senegal, Cameroon, Ethiopia and Zambia. Other plants that are currently at various stages of completion in eight other African countries, will be commissioned between next year and 2016.

Speaking in the same vein, Engineer Joseph Makoju, the Honorary Adviser to the President of Dangote Group and a season operator in Cement sector said the recent development in cement sector gave him a satisfaction.

While expressing happiness that Dangote Cement is leading the new price revolution, he stated that what Dangote cement has done was the first over his forty years in the cement sector. “I am satisfied with what is happening now.”

“Gone are the days of scarcity when the price would skyrocketed and far beyind the reach of the people. But today we are celebrating a price cut which has never happened before. This is possible because of increase in the production capacity which has made Nigeria to be self-sufficient with opportunities for export to other countries. It is on record that Dangote cement led this efforts and he deserves commendation.”

A representative of the SON, Mrs Cynthia Ifeagwu, a Deputy Director and Special Assistant to the Director-General of SON, who witnessed the unveiling, lauded the initiative of bthe management of Dangote Cement for being the first to comply with the new packaging of cement.

She said the Son has the mandate to protect Nigerians by ensuring they have quality products to consume and that the new standardization was an effort at ensuring only quality products with the right application is what is offered to the people.

The SON boss warned that the Son would implement to the letter the new guidelines of the cement standardization both with the manufacturers and other stakeholders connected with the product. “We will sanction and punish those who do not adhere to the guidelines and educate where necessary because some infractions could be as a result of ignorance and not deliberately.”

Mrs Ifeagwu appealed to other manufacturers of cement to follow suit because the SON wanted a speedy compliance with the new packaging which was being carried out in line with global best practices.

Chief Marketing Officer, Dangote Industries Ltd, Oare Ojeikere in his presentation stated that the new product is in line with the directive of Standards Organisation of Nigeria (SON) which stipulates the uses of the three grades of cement. According to him, the new cement product, 32.5 is to be used for plastering only as directed by the SON. He called on builders to adhere the directives adding that standard for cement is not invented in Nigeria but follows global best practices.

He said that using the right cement grade for blocks, columns, slabs and pillars is very important as it is easy to change leaking roof, broken doors, leaking plumbing but not the same for defective walls, columns, pillars and slabs. He said that as market leaders, Dangote Cement is at the forefront of the campaign to sanitize the building and construction sector.

A distributor, Alhaji Bala Muhammad Getso, Chairman, Giwa Dynamic Ventures Ltd congratulated Dangote Cement for reducing the price of cement saying the company is protecting the ultimate users. According to him, it will be easy for people to build their houses more so the cement is delivered to their doorsteps.

Secretary of Bricklayers Association, Lagos State, Akinmoladum Olaniyi commended Dangote Cement for the price cut saying that it will create more jobs for members of his guild. He explained that the nation will witness an increase in building and construction leading to more jobs.