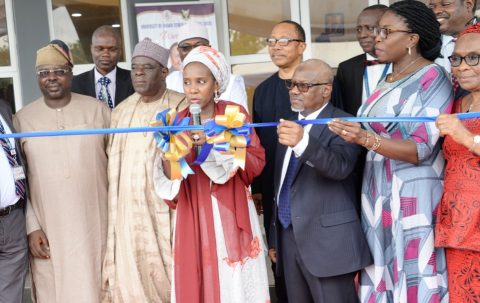 (AFRICAN EXAMINER) – Leading businessman and Chairman of Aliko Dangote Foundation, Alhaji Aliko Dangote has challenged the government to muster the will to provide critical infrastructure that will make the nation’s environment conducive to commerce and industry.

Dangote made this appeal while delivering the third Eminent Persons Business lecture and inauguration of the Aliko Dangote Complex, a N300 million naira ultra-modern building donated to the University of Ibadan, School of Business, at the Ajibode University extension, Ibadan.

He said his foundation will continue to prioritize education as a means of raising entrepreneurs that will change the face of the nation’s economy and lead to real growth and development.

He told his audience comprising of academia, students, royal fathers and businessmen that Nigeria has got the potential s to be among the most industrialized countries in the world and required only the right policies to propel the investors into taking the lead in industrialization efforts.

Delivering his paper titled “Industrialization – Backward Integration as a strategy for National Development: The Story of the Dangote Group”, Dangote whose lecture was delivered by Engr. Ahmed Mansur, the Group Executive Director of the Dangote Industries Limited, stated that for the nation to breakthrough industrially, the leadership and the people must have the political will, the courage and perseverance to succeed.

Dangote was of the opinion that backward integration is one of the fine policies of the government that has helped Nigeria’s economy and that he had led in this regard as a private sector operator, advising that the policy could be replicated in other sectors of the economy.

Highlighting the advantages of the backward integration, the business mogul stated that there would be increased control and efficiency as companies are better able to control quality and coordinate the delivery of raw materials or other supplies.

According to him, this level of control allows companies to increase their supply chain efficiency. Stock outs and over-stocking are better avoided, raw material supply is better managed, and delivery schedules can be better guaranteed.

He pointed out that going by his own experience as leading cement producer using backward integration, there will be cost control as costs can be better managed all along the production process.

Citing instances of countries that have used backward integration to climb the industrial ladder key sectors, Dangote said “Several countries have involved backward integration in some of their industries. Examples include Brazil, Ghana, Malaysia, Norway, and Russia. China and the United States of America probably have the most vertically integrated firms given their size and industrialization focus. This typically start with local content requirements for extractive industries and then includes consolidation across product value chains.

“Norway successfully managed the transition from a country with no direct capabilities in the oil and gas sector on the discovery of oil in the late 1960s to become a competitive producer of a variety of oil field services and equipment. Today, more than half of the capital inputs used in the sector are sourced locally, along with 80% of the sector’s operational and maintenance inputs..

“Similarly, oil and gas firms operating in Brazil were awarded more points when tendering for contracts if they demonstrated commitment to purchasing higher shares of goods and services from local Brazilian suppliers. Specific local content targets were set for onshore projects (70%) and offshore projects in shallow (51%) or deep (37%) water.”

These according to him include difficulties in obtaining adequate and reliable energy and power supply; lengthy, costly and politically sensitive processes of gaining access to land; poor-quality transportation infrastructure; the high cost of capital; long lead times before backward integration efforts yield rewards; sensitivity to external shocks and unforeseen costs;

“Inconsistency of policy implementation; lack of inter-sectoral policy coordination; inadequacy of knowledge and skills in the workforce; and lack of foreign exchange. Most of these challenges relate to the poor quality of the overall business enabling environment, rather than due to local content policies.”

Nevertheless, he argued that the policy had helped Nigeria in the cement sector pointing out that as at 2002 before the backward integration policy “local installed cement production capacity was about 3 million metric tons per annum (while actual production was under 2 million metric tons). Cement demand was approximately 9 million metric tonnes per annum and the supply gap was filled by cement imports. Imported cement accounted for over 70% of local cement consumption.

“Conservative estimates of the cement import bill as at 2002 placed it at between US$500 – US$600 million annually. More importantly, it essentially exported jobs to other countries and exposed the national economy to risk. Nigeria was one of the largest importers of cement in the world despite its huge limestone deposits. To build the nation’s capacity in the cement sector.”

However, with government introducing the policy in 2002. “It restricted cement imports into Nigeria while the issuance of cement import licenses were tied to investments in local cement production capacity with strict monitoring to ensure compliance. Sector specific incentives for the cement industry, in addition to other more general incentives e.g. tax holidays, capital allowance etc. were also an important part of the policy.”

According to him, “the impact of the policy was felt within the first decade of its implementation as Nigeria became self-sufficient in cement production. Installed cement production capacity that has now grown from 3 million metric tons in 2002 to 44 million metric tons as at December 2017. The country has successfully transitioned from being a net importer to self-sufficiency and then to a net exporter since 2017.”

In his remark earlier, Vice-Chancellor of the University of Ibadan, Prof. Abel Idowu Olayinka thanked Alhaji Dangote for the building describing it as a legacy that would forever be cherished generation yet unborn and by the donation, Dangote has become the first largest individual donor to the university.

He explained that Dangote was to donate N250 million to the university but they prevailed on him to build the complex rather than giving money and that the decision has paid off for the university.

Governor Isiaka Ajimobi of Oyo state, who is the Guest of Honour on the occasion urged Nigerian youths to learn a big lesson from Dangote’s humble beginning but with hard work has become one of the greatest entrepreneur in Africa.

The Governor who was represented by the state Commissioner of Education, Prof. Joseph Adeniyi Olowofela, lamented that most youths of today do not cherish hard work but want to get rich quick which explained the increase in social vices in the country

“We need to shift the paradigm shift from the get rich quickly at all cost to hard work that leads to wealth”, he stated.

The Director of the University of Ibadan, School of Business, Prof. Nike  Osofisan said the institution owed Alhaji Dangote a huge debt because the complex was more than a building.