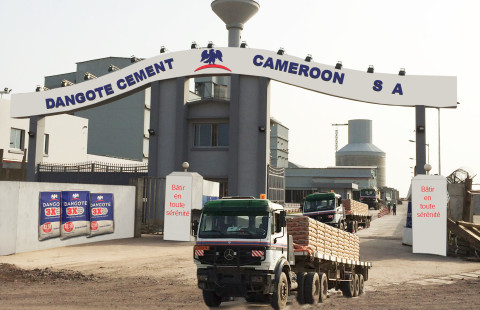 The management of the leading Pan African Cement Manufacturer, the Dangote Cement Plc has assured the government of Cameroon that it would help shore up local production of the vital product following the ban on importation of cement into Cameroon. 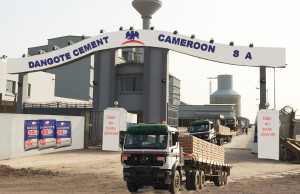 The assurance came in the wake of the formal launching of the Company’s high grade 42.5 cement type into the Cameroonian market after a successful inauguration of the company’s 1.5m MTPA capacity cement plant in Douala.

The Dangote Cement management also told newsmen that it appreciated the gesture of the Cameroonian government and that the ban was a vote of confidence on the ability of cement manufacturers in the country, especially Dangote Cement, to meet and surpass local consumption demands.

Already, with the addition of the Dangote’s 1.5m MTPA, Engr Abdulahi Baba, a, General Manager and head of Cameroonian factory, explained that the three manufacturers of cement in the country are about surpassing local consumption demands and that Dangote management are already looking towards export prospects to neighboring countries to Cameroon

According to Baba, Cameroon with a consumption growth of 8 per cent, and with a local production of 2.9m MTPA, the Dangote management was looking at export potentials in Chad, Central African Republic, Garbon, Equitorial Guinea and Togo even as the Company considers future expansion.

He explained that the plant has one of the most recent facilities of ensuring that there are no dust emission during production.

The General Manager stated that the company has put strategies in place to achieve 30 per cent market share, noting that there was also plans of achieving 30 per cent export of total production.

Baba stated: the demand is growing everyday because of the infrastructural developmental efforts of the government. We will take the advantage of the ban on cement importation here in Cameroon. We have structured distributorship system in place . Our route to market is very clear and defined. We are building a jetty so that we are not held down but have smooth distribution during congestion at the ports.

“We are set to achieve stability of operations in 2015 Q1, pursue aggressive market penetration and consolidation through appropriate above the line and below the line activities. 170 distributors have been selected after the interview process. 85 distributors will start, while the number will gradually increase with increasing production

“Mines at Tombel has been opened up and it is under exploitation. The Mines at Batoke would soon become operational. Exploration licence for Foumban deposit has also been secured. EIA and other activities for securing mining lease are being being processed. About 5,000 MT of pozzolana is stockpiled at the living area,» he stated.

Baba noted that the company’s ex-factory price is the cheapest in Cameroun when compared to other products in the cameroun market, stressing that Dangote Cement is cheaper than 32.5 grade that is sold in the open market.

Fonoggi Serge, MD ETS (distributor) noted that the product is of a very high quality but sold at a very cheap rate,.

“Consumers and other dealers are already making demand for the commodity. I sell 20 tons daily and the acceptability of the product is rapidly increasing and it goes for between 4,000 – 4,500 CFA.” He stated.

Kamdoum Rodrigue, a block maker, certified that the product is very good, stressing that it take a shorter period to dry.

“Before now, we used to stay for one week waiting for the blocks to dry, but with this new product, we only stay for two to three days and our blocks are ready for supply. Now we meet our customers demand earlier than it used to be.” Rodrigue state.