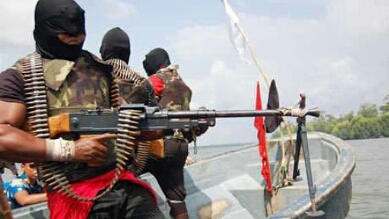 BALTIMORE, MD (AFRICAN EXAMINER) – The Niger Delta Avengers have again blown up another oil facilities belonging to an oil multinational in Bayelsa State.

In what appeared another follow-up verbal offensive to the Federal Government (FG), the Avengers asserted in another tweet later: said: “Good the Foreign Refineries stop buying Nigerian Oil”.

The latest devastating strike will be about the third in this week alone.

It would be recalled exactly a week ago, the same group struck twice in Bayelsa State, attacking and destroying oil assets, belonging to a US oil giant, Chevron and Mobil.

The Avengers Wednesday indicated that it was not willing for any negotiation with the FG and subsequently clarified that whoever claimed to be doing such on their behalf was fake, hence not representing their interest.

Just yesterday (Thursday), the Militants in a statement titled: “Enough Of This Injustice” issued by their Spokesperson, Brig. Gen Mudoch Agbinibo, linked their destructive offensives to poor state of social amenities in the Niger Delta region.