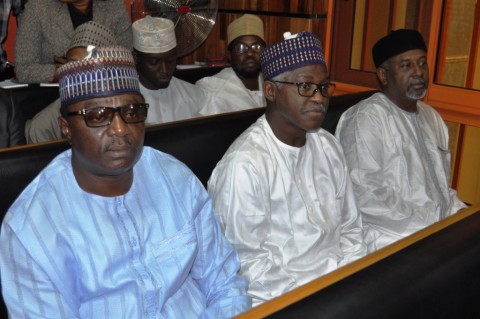 After deposing of an affidavit, a Lawyer and human rights activist, Mr Ebun-Olu Adegboruwa, Tuesday filed a suit before a Federal High Court sitting in Lagos, challenging the continuous detention of the National Publicity Secretary, Olisa Metuh.

Adegboruwa who hinted about the affidavit Monday is seeking the court to order the arraignment of the accused who the Economic and Financial Crimes Commission (EFCC), alleged collected the sum of N400 Million from the former National Security Adviser, Col. Sambo Dasuki (rtd).

The opposition National Spokesman was picked by the EFCC officials last week Monday, January 5, 2016. He had since refused to confirm the amount he collected on behalf of the former President Goodluck Jonathan and vowed not to return any money.

The grounds of Adegboruwa’s suit include seeking “An order, directing the first respondent to forthwith release the applicant from his unlawful custody, pending the hearing and determination of the motion on notice.

“An order, granting bail to the applicant herein, pending the determination of the motion on notice, or his arraignment before any court of competent jurisdiction.

“An order, directing the first respondent to produce the applicant before the court and to show cause why he should not be released from custody, pending the determination of the suit.”

Earlier, the Lawyer has challenged the arrest and detention of Metuh by the EFCC. He subsequently sought the enforcement of the suspect’s fundamental rights as provided in Section 36, 37, 38, 39 and 40 of the 1999 Constitution.