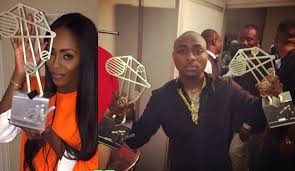 Davido, Mafikozolo, Uhuru and Clarence Peters were the big winners of the fourth edition of the MTV Africa Music Awards which held in Durban, Saouth Africa, on Saturday night. Quadruple nominees,

Mafikizolo triumphed in the Best Group and Song of The Year categories, while Davido won Best Male and Artist of the Year.

Uhuru was recognised for Best Collaboration for his part in “Y-tjukutja” by Uhuru Ft. Oskido, DJ Bucks, Professor and Yuri Da Cunha, and in Song of the Year.

In this year’s newly introduced lifestyle award categories, Kenyan Actress Lupita Nyong’o took home the award for Personality of the Year, while The inaugural MTV Base Leadership award was won by Tanzanian entrepreneur Ashish J. Thakkar.