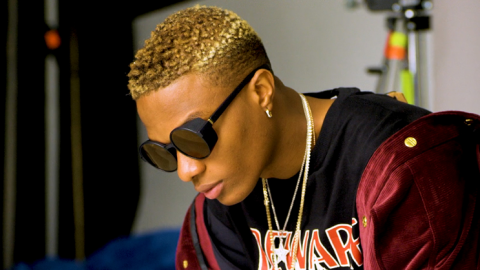 Davido performed at the Dr Sam Nujoma Stadium, Windhoek in Namibia, with over 15,000 people in attendance.

Davido arrival on stage ignited a wild jubilation among the audience

The “Assurance’’ crooner was mimed by the crowd as they sang along every lyrics of his song with the opening of the hit track –  “Dami Duro’’ as well as such as “If’’, “Aye’’, “Fia’’, and “Assurance’’.

Davido was encircled by his fans as he jumped into the crowd during his performance set with his life band; he also gave out most of his clothing items to the excited fans.

The artiste posted more of the concert videos on his Instagram handle @Davidoofficial.

Similarly, Wizkid also put up a superb stage performance at the One African Music Fest in New York.

The “Ojuelegba’’ maestro who recently opened his pop-up store in New York joined a mass of African super stars for the Fest.

Wizkid performance was the climax of the event as he loped over tracks from his collection of hits like “Don’t dull’’, “Baba Nla’’, “Soco’’, “Manya’’, “Nowo’’, “Fake Love’’ among others.

His liveliness was on point as he moved from one part of the stage to another, doing some “soco’’ and “shaku shaku’’ moves in fetching the crowd.

He also brought out “Afro B’’, a German rapper as they performed the superb single “Joana’’ remix.

Wizkid posted more of the concert videos on his Instagram handle@wizkidayo.

Davido and Wizkid made sure that the Afro-beat genre message spread to the ever going audience/NAN.