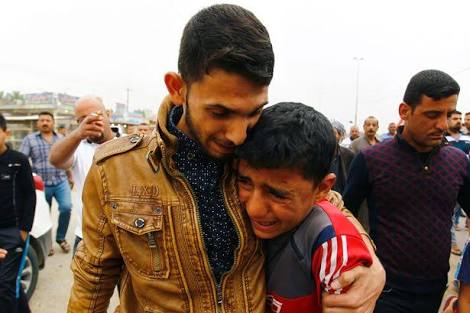 This was confirmed by the officials of the Interior Ministry.

Following the sad event, government has declared three days of mourning as a mark of respect to the victims and families of the heavy blast, which also injured over 200 people.

The Sunday eruption was believed to be the deadliest single bomb attack in Iraq since 2007.

Eye witness accounts narrated that a lorry which was packed with explosives was detonated in the Karrada district as families were shopping for the holiday to mark the end of Ramadan fasting.
Rescue workers confirmed that there were cases of the whole families being killed in the blast. Many of the victims were also burnt.

Speaking on the extent of the attack, a member of the Civil Defence forces was quoted as saying “We need a number of days to be able to recover the bodies of victims. It is a difficult task”.

The forces further confirmed, stating that the lists of victims he saw included whole families – the father and his sons, the mother and her daughters.
As the so-called Islamic State (IS) has claimed responsibility for the suicide attack, the Prime Minister (PM) Haider al-Abadi has received enraged crowds when he visited the mainly Shia Muslim area in the hours after the bombing.

However, his office confirmed that the PM understood the reaction of residents, hence would increase security by banning “magic wand fake bomb detecto