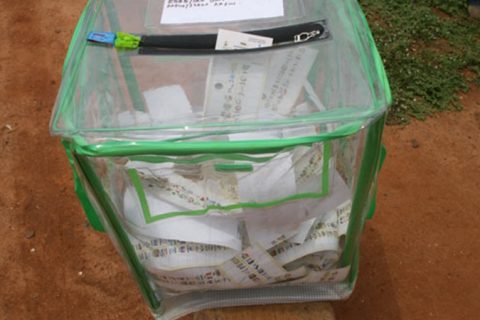 …As Woman Gives  Birth Inside Car

Scores of travellers from various parts of South East Nigeria, returning to their respective bases after the Christmas and new year celebrations, were on Saturday stranded at the Niger Bridge head, Onitsha, Anambra state, following closure of the Bridge and restriction of movement  as a result of the Delta state  local government election held weekend.

However, there was a mild drama and confusion at about 12 noon, as a pregnant woman who was among the stranded travellers and said to be travelling to Lagos suddenly went into labour and was quickly attended to by other fellow women who  rushed her into a car which was quickly cordoned off and turned into an emergency labour room.

African Examiner gathered that few minutes after the woman was rushed into the car, she delivered a bouncing baby.

Recalled that Anambra State government which envisaged the trouble the closure of the bridge may likely cause travellers, had on Friday issued a travel advice to returnee indigenes of the state who may seek to use the bridge.

Mr Tony Nnachetta, the state Commissioner for Information and Communication Strategy had in a statement said: , “As a result of local government elections which is scheduled to hold this Saturday, 6th January 2018 in Delta state, the Delta state government has announced that curfew will be in place in the state effective midnight on Friday.

“The curfew will affect movements into and out of Delta state including its borders and connecting roads with Anambra state.

“Ndi Anambra are therefore advised to take note of this development and make adequate travel arrangements to avoid being stranded, as they make plans to return to their various places of residence after the Christmas and New Year celebrations.”

Our Correspondent reports that as  early as 7am, a huge human and vehicular traffic had accumulated at the bridge on the Onitsha end, even as security operatives, who manned the bridge and other borders of the state refused them access to the bridge, insisting that movement was restricted.

The development, forced most  of the stranded  travellers to return back to their respective states after wasting several hours..