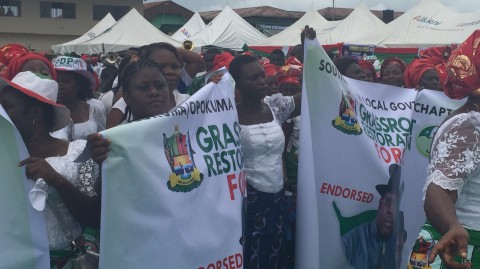 Governor of Bayelsa State, Henry Seriake Dickson on Tuesday formally declared his intention to seek re-election under the platform of the Peoples Democratic Party (PDP) and vowed that his government will wind up the All Progressives Congress (APC) on December 5 when the election would take place.

In his declaration held in Yenagaoa, at the popular Samson Siasia Stadium, the governor said even though the opposition is relying on federal might, security agencies and and the Independent National Electoral Commission (INEC) to assist them to rig election, “Bayelsa has no room for APC.” 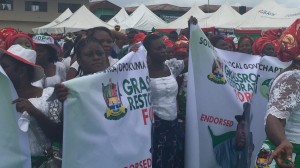 As early as 9:45 am, the stadium was already filled to capacity as supporters of  governor Dickson and the PDP estimated at about 10,000 sat waiting for the formal declaration.

Not even the rain that added blessing to the event could disrupt the chanting of solidarity songs by women groups, civil society organisations, intelligentsia and leading bureaucrats.

Dickson said, “Having listened to our people and to avoid going back to Egypt, I have decided to announce my formal entry into the Bayelsa State governorship race under the platform of PDP to consolidate on my achievements. I count on you and God

“Bayelsa state has no room for APC; the other party has no message for Bayelsans. We don’t even know their officials. The only thing they are relying on is federal might, security agencies and INEC. But we have you (Bayelsa people) and God. The good news is that they cannot win this state, they are not on ground in this state.

“You are here doing your job but they are in Abuja. Some of their factions have become a parastatal of the PDP. We will wind up APC on December 5. I have to reinforce it on your mind that PDP is on ground in Bayelsa state and has been adopted as Ijaw party.

“We have driven away operation violence and cultism to operation peace. On the day I made my declaration to seek election, five young men were gunned down to put fear in me because they underestimated us. All the people who are cultists and financiers of violence are in the other side. Those that are maimed, they have abandoned them. You young people should be careful because the only thing they know is violence. Propaganda doesn’t win election, it is the people that win election.

Ex-President who Jonathan spoke in pidgin English, urged Bayelsans not to make the mistake of voting for APC in the governorship election.

He underscored his reasons for supporting the re-election of Dickson on Saturday December 5, 2015.

He said, “Dickson wants another four years and I say he should go ahead. Some people are frowning against it saying why should I endorse him. There are four things that worry state governments and they include payment of of workers. Dickson has paid workers. The other indebtedness to World bank. Dickson has tried very well; the third is infrastructural development; the man has also tried.

“The governor has also tried in the area of security. The problem is that Ijaw people like to betray and sell off their brothers and if we continue in that way, Ijaw will not develop. Let’s allow Dickson to finish the next four years. I believe that if we come together, things will be better. The leadership of PDP has resolved to deliver Dickson in this coming election.”

In his solidarity message, Alamieyeseigha said, “By Gods grace, PDP will continue to rule this state. The Governor has done creditably well and we know that you will take us to the next level. All Bayelsans should come and vote for our Governor on that victory day.”

Governor Okusegun Mimiko, said the APC had tried to humiliate Jonathan, but they failed because God was on his side, going by what they planned.

He told Jonathan that,”God has used you to continue to keep Nigeria together. One of the issues we discussed was the invasion of Akwa Ibom State Government House. Everybody knows that it won’t happen under Jonathan’s government. Those who demonised PDP in the past are in PDP; about 90 per cent of all those in APC were in one way or the other in PDP in the past. The PDP under Jonathan demonstrated vision for our country.

“We’re proud of the investments of Governor Dickson in education, you have restored the dignity of Ijaw man. The Ijaw people should stand by you to consolidate on your achievements. Ijaw people gave Nigerians the opportunity for the Presidency.”

The Speaker, Bayelsa State House of Assembly, Hon. Konbowei Friday Benson said, “If you (Bayelsans) cannot deliver your constituencies and wards, the leadership of the PDP has resolved that you will be suspended.”

For Dokubo-Asari, “We Ijaws don’t run away from our enemies. Jonathan did a lot for all those who have turned against us. This was what the APC defectors did. Nobody, wherever he is, can move the Ijaw nation. We’ve never been conquered, the British knows this fact. This fight is beyond Henry Seriake Dickson, it is beyond you and me, it is for all. He will never be disgraced on December 5. They have boasted that they have control of the Army, INEC, Police, Navy and SSS. But we will meet in the battlefield on Election Day.”

A representative of Women for Change said Bayelsa women are all for PDP and Governor Seriake Dickson.

“We can’t allow APC to remove our President (Jonathan) at the federal level and for them to succeed again in Bayelsa State. We have all resolved to vote for the return of Governor Henry Seriake Dickson on Saturday December 5 2015.”