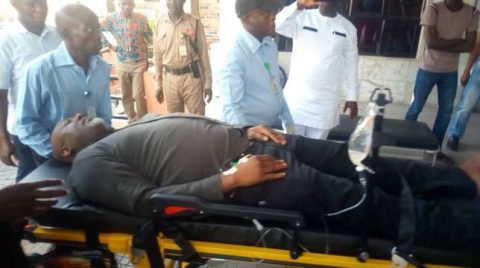 ABUJA, NIGERIA (AFRICAN EXAMINER) – Another phase of drama unfolded Tuesday when the controversial and embattled Kogi Lawmaker Dino Melaye attempted to flee when he was about to be taken to Lokoja from Abuja.

The real drama ensued when Melaye according to reports suddenly jumped out of the moving police vehicle at area one roundabout, Garki Abuja, on sighting four hefty men suspected to be his thugs emerged from nowhere to frustrate the police move to drive him out of Abuja metropolis.

Melaye who is representing Kogi West zone reportedly is to be paraded in Lokoja, alongside six other suspects over alleged gun running.

The Lawmaker who was said to sustain injuries while the brawl and pandemonium lasted was driven away in an ambulance and now being hospitalized at the Zanklin Hospital, Abuja.

The daring suspected thugs took the policemen by surprise and this prompted their threat to shoot Melaye and his men.