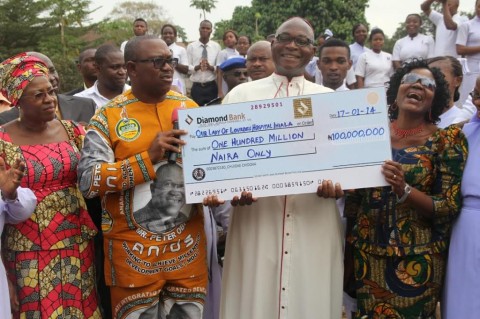 Most Rev. Dr. Hilary Odili Okeke, the Catholic Bishop Nnewi Diocese, has asked Governor Peter Obi of Anambra State not to quit politics as being planned by the Governor after the end of his eight years in office, come march this 2014. 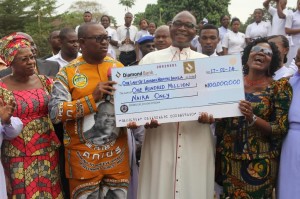 The cleric, made the plea after the Governor’s proclamation that he was done with politics when he leaves office in March 17 this year.

The Bishop said the people of Anambra State, Igbos and Nigerians should pray that Obi would rescind his decision as people like him should have the opportunity of serving Nigerians at the federal level, going by his exceptional performance in Anambra State in the last eight years.

The clergy man, had received a cheque of N100 million from Obi at Our Lady of Lourdes Hospital, Ihiala for ongoing projects at the Catholic church owned Hospital, as well as another cheque of N30 million for the Maternity and child care complex at Azigbo.

The Bishop had applauded Obi for keeping his words and also using money meant for the state for the provision of infrastructure in the area.

He stated that other hospitals in strategic partnership with the Government of Anambra State would also receive benefit from similar gesture saying it was part of final push by his administration towards achieving the Millennium Development Goals MDGs by the year 2015.