Drama as Lebanese Ambassador in Nigeria Walks Out on Reps Panel 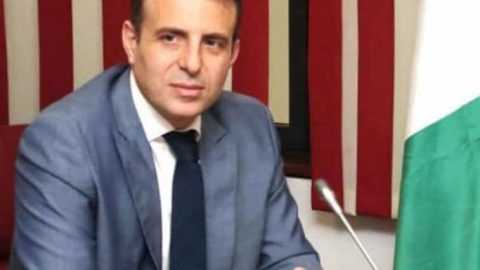 (AFRICAN EXAMINER) – The Lebanese Ambassador to Nigeria, Amb. Houssam Diab, on Thursday, walked out on members of the Nigerian House of Representatives Committee on Diaspora Affairs, at a meeting which lawmakers now say was informal.

Mr Diab was reportedly asked to appear before the committee to explain the alleged maltreatment of Nigerians in Lebanon.

The Ambassador is said to have walked out of the lawmakers because he was not expecting the level of media coverage given to what had been termed an informal meeting to strengthen ties between the two countries.

Reacting to the outcome of the meeting, the Minister of State Foreign Affairs,

Zubairu Dada stressed that it was an informal meeting and the Ambassador was nice enough to join in.

According to the minister’s communique, there is no law that says the Lebanese Ambassador had to attend the meeting, but he came because he has an interest in the joint relationship between Nigeria and Lebanon.

Mr Dada noted that there are a lot of Nigerians in Lebanon, and there are many Lebanese in Nigeria, so it was pertinent that the meeting held to further reiterate that the Lebanese community and the Nigerian community will always stand together to ensure that justice and respect for human lives is a priority.

He stressed that the relationship between the two nations will help bring an end to modern day slavery.

Throwing more light on the earlier misunderstanding, the minister said though the meeting was meant to be an informal one, the Ambassador was not aware that such a meeting needed to be documented.

“Because of the law of diplomacy, he wasn’t expecting to have media there and it was immediately resolved that it was going to be an executive session,” Mr Dada stated.

The minister apologized on behalf of the Ministry and the country.

Thursday’s incident follows a recent event involving one Temitope Arowolo, who is said to be undergoing trial for alleged attempted murder in Lebanon.

Mr Dada revealed that  Temitope will be home before the end of the week, adding that so many other Nigerians who want to come home from Lebanon will be availed the opportunity.

He said the ministry is also looking at the case of a Lebanese who is held in Illorin on charges of human trafficking.

The minister promised that collaborations will continue to ensure that Nigerians can go work in Lebanon legally, without being dehumanized.

He asked Nigerians to be vigilant and monitor what is going on around them, lest they fall prey to human traffickers.