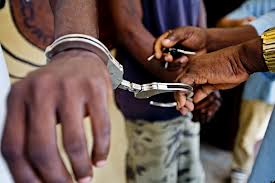 Operatives of the Department for State Security Service DSS in  Anambra state have arrested three kidnap suspects including a Herbalist, in connection with the abduction of one Charles Onyido at Ogbunike, in Oyi council Area of the state.

The suspects were also accused of kidnapping an Onitsha based legal practitioner, Barrister Ejike Efobi at Nkpor, in Idemili North local government area of the state on 5th of June this year.

Director of DSS in the state, Mr. Alex Okeiyi, who disclosed this to newsmen on Wednesday in Awka, the Anambra state capital, said that the suspects had demanded for a ransom of N100 million from the victim’s family.

He gave the names of the suspects as 25- year -old Chukwuebuka Okafor, Ernest Elem and 68- year – old Ajana Onyibor a herbalist from Igbakwu, Ayamelum council area.