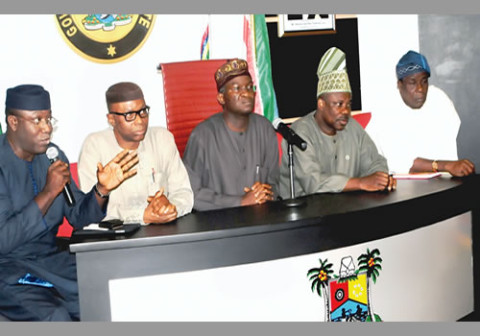 Following the outbreak of the Ebola Virus Disease (EVD), Governors of the Southwest zone in Nigeria have held an emergency meeting in Lagos to find ways of checkmating the spread of the pandemic, while decrying porous borders. 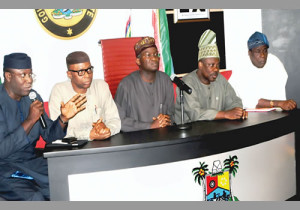 Speaking after the emergency meeting, which lasted for hours, Fashola said he had been meeting with his commissioner on the possible ways to checkmate the spread of the disease.

“Essentially, we have addressed issues of containment and the challenges of illegal borders, we have felt the need to express appreciation to health workers who have taken responsibility from the front by attending to people who are showing symptoms and people who are suspected of having contact with the very first case that was reported in a man who came in from Liberia.

“All of what we have now are primarily related to that very first case and all the suspicious cases that have been confirmed and sicknesses that have followed are directed related to that first case. I use this opportunity to commend those health workers who have responded. Our appeal to the Nigeria Medical Association (NMA) is to act in humanitarian interest for the purpose of containing what is a current emergency situation so that we can put this matter behind us,” he said.

Fashola added that the governors were also discussing possible support by the Federal Government and coordination among states, saying that “we feel that it is imperative that our collaboration suggests to us that Nigerians, especially those in these states and in other states should not panic and that we would overcome this with the very best practices and collaboration, it is important therefore that advocacy must continue about what the risks are and the sources are.”

His counterpart from from Ogun, Amosun, lamented the porous border in his state, saying that “we are more prone and more at risk really in this Ebola virus than so many others and I did mention that we have put all our security agencies and the respective medics at these illegal borders.

“But when you have in excess of 100, you and I know that the state doesn’t have the capacity really in manning these borders. Indeed, it’s not our responsibility to man these borders, we should collaborate with the FG which is what we are doing. As of the last, we have about 70 illegal borders that you can take containers and trailers and what have you, even on a normal day, people hardly use the official borders.

“It’s the illegal ones that you see them packing all those smuggled cars and now it becomes more worrisome by the time you look at the fact that everybody now is taking proactive measures of banning flights. So, if people cannot fly, you know obviously they would find a way of entering the country, that is why we are calling the federal government to assist us. We need men and materials to man those borders. As we speak, we have about 68 Hilux vans manning those borders and not just vehicles alone, we need the man power of immigration, customs and even our medics have to be there. And that is why I have been shouting that we need help if we are going to succeed in the prevention of this Ebola virus and we have agreed that we would interface with the federal government to see what they are doing,” he stated.

According to him, “we learnt that they are doing something, but we need to see it what and what they are doing. We are exposed to over 100 borders in Ogun State, I know Oyo too will have stories to tell. Don’t forget that this disease has been localized more or less and everybody agrees that it is within this West African sub-region and of course we have that access where people can come in easily.”

Also, Ondo Governor, Mimiko added that there is no question about the fact that manning the borders is the responsibility of every Nigerian and that everybody should know that those who aid and abet illegal entry into Nigeria now could be up to something that could be dangerous to the health of the country.

“So, we out there, all Nigerians and adjoining villages, everybody must take responsibility of combating this new challenge as a nation and it’s very important for the message to go out,” he said.

More so, Governor Fayemi spoke on the trial drug just discovered in the United States, urging the Federal Government to give it a try if possible it could work for the patients in Nigeria.

“We have heard that there is a test drug that is currently being applied to the doctor who was taken from Liberia to Emery University Hospital in the USA and is being treated there and has some impact on his improvement. But this is still a drug that is on trial. From what we gathered, it has been tested on animals, but it has not been tested on humans yet, except for this particular case and there are processes a country has to go through to procure drugs that are still on trial.

“Even the FDA has not certified this drug for use yet and if we are going to access it at all, my own limited knowledge of this process is that it can only be a controlled trail centre for it at this stage, it can’t be a certified drug for use. If what the federal government is trying to do is to be one of the centres to test the efficacy of the drug, I think that is well meaning, that is commendable and we should encourage the FG to take that action.