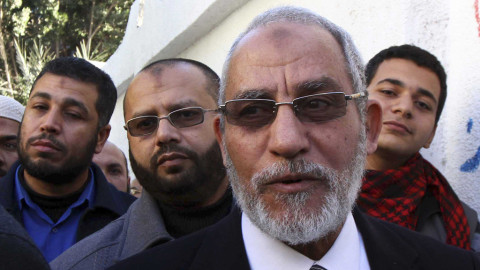 The trial and conviction of the arrested and detained suspects of July 2013 Egyptian protest and massacre continues as a criminal court in the country this morning, sentenced strong Muslim Brotherhood leader, Mohammed Badie, and 36 other members to life in prison. Death sentences were also slammed on 10 others, including an underage defendant who was given three years in prison.

The criminal court in the northern city of Qualiubia convicted Badie and numerous others for involvement in deadly protests. The sentence carries a life sentence. 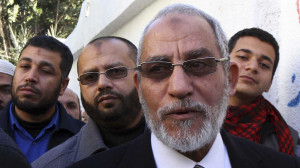 African Examiner leant that Justice Hassan Farid said the defendants, including Badie, were involved in violence which led to massive killing during the protests that trailed ousting of former President Mohammed Morsi, widely believed to be influenced by his former Chief of Army Staff and just elected President, Abdul Fatah al-Sisi.

The judge said the convicts committed the violence “to achieve terrorist goals.” All 37 defendants were also charged for blocking a major road near Cairo during the protests which followed the coup of July 3, 2013.

Also the court confirmed the death sentence of the preacher, Mohammed Abdel-Maqsoud, a Salafi in absentia. Abdel-Maqsoud reportedly fled to Qatar after Morsi was overthrown.

The Egyptian government had since blacklisted and proscribed the Muslim Brotherhood as a terrorist organization last December, which enjoyed the support of sacked President Morsi, who himself is a member.

This conviction of Badie followed  two death sentences which were previously pronounced on him following the bloody coup.

International and human rights organizations have expressed concern over the recent spate of over 200 death sentences in several mass trials.

An Amnesty International report issued in a statement on Thursday that at least 16,000 people have been detained in the last one year and alleged another 80 have died in detention.

In the same vein, three Al Jazeera English journalists – Peter Greste, Mohamed Fahmy and Baher Mohamed last week Monday were convicted and given seven years prisons for aiding the Muslim Brotherhood during the protests against takeover of former President Morsi, a development that attracted criticism and protests by journalists across the world, among of which was BBC’s journalists’ one minute rally in London penultimate this week.