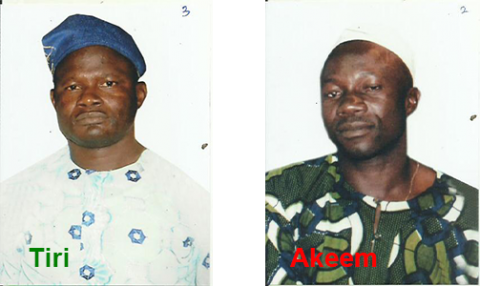 As part of the continuing enquiry into the torture of Ejigbo Market women, the Nigeria Police Force has obtained the pictures and descriptions of the three suspects declared wanted during the last press update. 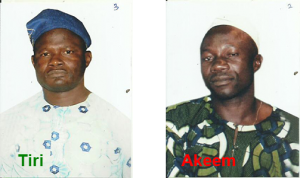 He is between 45 to 50 yrs old and hails from Ayetoro in Yewa North Local Government Area of Ogun State.

He is dark in complexion, tall with a big frame and has no tribal marks.

The suspect has white set of teeth with an artificial gold tooth. He had been known as a panel beater before eventually started parading himself as the Oodua Peoples Congress (OPC) coordinator.

He speaks Yoruba and English Languages. He is married and has children and he likes attending parties.

He is dark in complexion, slim but tall and has tribal marks.

He is married and is believed to be a member of the OPC at Ejigbo.

Tiri is about 37 years of age. He hails from Ibadan in Ibadan North Local Government Area of Oyo State. He is married and has children.

He is dark in complexion, not too tall, no tribal marks, has pointed nose with uneven set of teeth. He also has visible thick lower lips.

The public is hereby implored to furnish the Police with any useful information that will lead to the arrest of these wanted suspects.

Members of the public are enjoined to either provide information to the nearest police station or contact the following numbers: 08157178111and 08098902777. Culled from the gazelle news.

In case you missed it below you-tube video is the atrocity they committed: