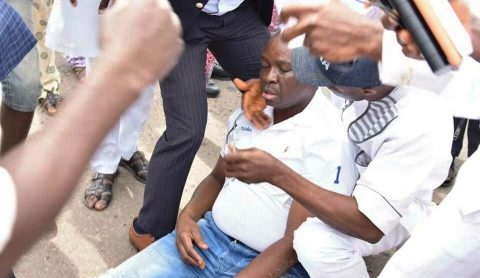 (AFRICAN EXAMINER) – Ekiti State Governor Mr. Ayodele Fayose Wednesday alleged that policemen deployed to the state for this Saturday Governorship election have stormed the venue of his party – the Peoples Democratic Party, PDP’s rally and harassed him.

Although, there is no evidence to confirm the alleged attack, still, the outgoing Governor shortly after the rally appeared in a neck brace and narrated his experience to journalists amidst the party’s supporters.

Fayose who urged PDP members to remain resolute, as well as vote for his party’s candidate who is also his Deputy, Prof. Olusola Kolapo suddenly burst into tears while narrating his alleged nasty experience with the security men.

The Governor declared that the Inspector General of Police IGP should be held responsible if anything happened to him.

He cried out: “My people, the Lord will fight this battle. The COMPOL MOPOL of Nigeria Police and the AIG ordered that the governor should be killed. I was slapped by a policeman and shot at.

“But I want you to be of great courage. This battle must be won. This is an army of occupation. I want you to stand and remain standing.

“I hope they will not cause 1983 crisis. I call on the international community, Ekiti is under siege. How can I be the Governor of the state and be treated this way? I will go back to the hospital and remain there for a while.

“Stand with Eleka. I am having a lot of pain and I decide to bear this pain because of you, I am pleading with the international community, Nigeria is in trouble. They have arrested so many teachers, many okada riders, they put them in jail. Come and save Ekiti, this is our hour of tribulation.