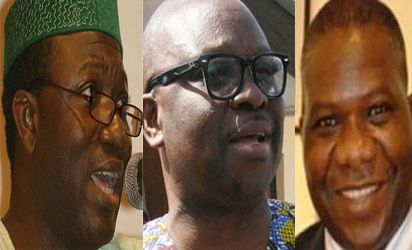 The trio of Governor Kayode Fayemi of the ruling All Progressive Congress (APC), Ayo Fayose representing Peoples Democratic Party (PDP) and Opeyemi Bamidele of the Labour Party (LP) have all shunned  a Stakeholders Meeting for Political Parties, Candidates and Traditional Rulers’ organized as part of measures to ensure a successful and violent-free governorship election in Ekiti State on Saturday.

No reasons were given for their absence at the meeting organised by the Centre for Democracy and Development (CDD) and the Democratic Governance for Development Project (DGD II) of the United Nations Development Programme (UNDP) in Ado-Ekiti, the state capital.

Meanwhile, 19 other parties including six candidates whose parties are contesting the election were present at the meeting which also witnessed the joint signing of a non-violence/peace pact (Electoral Pact) by the parties and other stakeholders.

National Electoral Commission (INEC) chairman, Prof. Atahiru Jega, who was represented by INEC National Commissioner, Prof. Lai Olurode said the commission will not tolerate violation of the provisions of the Electoral Act especially those contained in Section 129 on the conduct of parties and electorates on Election Day.

The INEC chairman said the failure of the Ekiti election would be an embarrassment and a disaster for Nigeria as the world is watching the conduct to judge how the 2015 general elections would be.

“We at the commission have taken several measures to avoid the pitfalls of the Anambra Governorship election, not that we did not prepare adequately, but providence had a way of intervening despite all measures we took. We have however put many things into consideration including the restructuring in the commission among other conflict-mitigating measures.