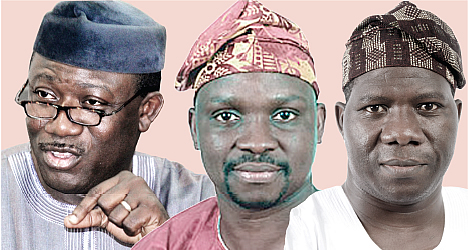 A total of 18 different political parties are participating in tomorrow Ekiti’s governorship election.

From the number, the major contenders are the incumbent governor Kayode Fayemi of APC, former governor of the state, Ayo Fayose of PDP and Opeyemi Bamidele who is the Labour Party flag bearer.

Reports indicate total of 29 foreign and local observer groups have been accredited for monitoring.

The State Resident Electoral Commissioner (REC) Halilu Pai, confirmed that more than 603 additional polling units have been created, raising the total number to 2798.

REC also confirmed that all sensitive materials have been distributed to the 16 local government areas of the state.

Security has been beefed in the nooks and crannies of the state with stern looking defense personnel drawn from the military, police, NSCDC, NDLEA and Department of State Security (SSS).

The Police Public Relations Officer, ASP Victor Babayemi, informed that over 12,000 mobile police officers have been deployed to the state in addition to the regular officers as well as 26 sniffer dogs.

This figure is in addition to another 15, 000 NSCDC officers already deployed to the state. Also deployed was a surveillance equipped camera vehicle which could cover a large land mass.