The Ekiti State Governor-Elect, Mr Peter Ayodele Fayose has reiterated that the era of imposition was gone forever in the Peoples Democratic Party (PDP).

Fayose who stated this during a meeting with aspirants to legislative and local government elective positions in Ado Ekiti on Monday, said that he would provide a level playing field and not induce the election in favour of anybody. 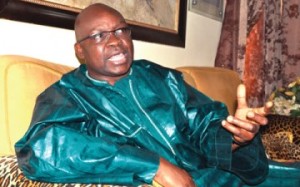 According to a press statement issued by Fayose’s Chief Press Secretary, Mr Idowu Adelusi, and made available to the press in Ado Ekiti on Tuesday, the governor-elect told the aspirants that the party will screen each aspirant before they could be allowed to participate in the election.

He enjoined all aspirants not to bribe any party leader because such will not help them.

Fayose also warned that the party will not hesitate to sanction any erring member who remains in the party destroying it, assuring that his government will ensure that all members of the party benefit one thing or the other before the expiration of his tenure.

He stated ‎further that his administration would provide enabling environment for the people to promote themselves and the party to achieve stability and success.

Also during the meeting, the state chairman of the party, Mr Makanjuola Ogundipe thanked the President, Dr Goodluck Jonathan and the party’s national chairman, Alhaji Adamu Muazu for supporting the party to win in the last election, assuring that Ekiti PDP would become a model soon in terms of discipline and good governance.

One time Education Minister, Professor Tunde Adeniran who was at the meeting called for support of the party members and people of Ekiti State to the governor-elect so that he is able to perform better than the last administration.

He pledged his support to the party’s position saying there should be no room for imposition of candidate again in the PDP.