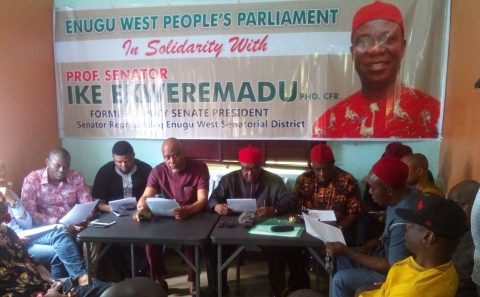 (AFRICAN EXAMINER) – A group operating under the platform of Enugu West People’s Parliament has condemned in strong terms the attack on the former Senate President, Ike  Ekweremadu by members of the proscribed indigenous people of Biafra IPOB, in Nuremberg Germany .

While also flaying  the threats by the Biafran agitators against the South-east  governors and other political leaders in the region, the group called for a “thorough investigation, arrest and prosecution of all those who planned and carried out the attack on the Nigeria Senator, representing Enugu West senatorial district .

Reacting to the attack on Senator  Ekweremadu by members of the IPOB in Germany last Saturday, the group which briefed newsmen in Enugu Monday on the development, urged Nigeria’s federal Ministry of justice, the Nigerian Embassy in Germany and the Nigerian Diaspora Commission to rise to the occasion with a view to ensuring that the culprits are brought to book.

Few hours after the attack, run away leader of IPOB, Nnamdi Kanu had applauded the action of his members and offered 1m naira reward for credible information on overseas travel of Igbo leaders, especially, the south east governors.

He accused Ekweremadu of working with governors in the zone to proscribe IPOB and its activities.

Spokesman for the group, and former Transport Secretary in the federal capital territory FCT Abuja, Chief Jonathan Ivoke, described the IPOB members who perpetrated the uncivilised act as “miscreants masquerading themselves as those fighting for the Igbo agenda.”

The group urged Igbo leaders who are currently occupying various political and cultural offices not to be distracted by the threats in their passionate efforts to serve the Igbo nation.

They went further to  condemned what it termed  as a ”dastardly, cowardly and sacrilegious” attack on Ekweremadu by members of IPOB,  noting that the lawmaker has done so much for his constituents, the Igbo nation, Nigeria and the entire West African sub region.

Maintaining that he was instrumental in ensuring the bail of IPOB leader, Nnamdi Kanu, the group said that Ekweremadu also drew the attention of the president to the possibilities of the python dance escalating to another civil war.

”Ekweremadu has urged the president to address the obvious marginalization of the Igbo and this shows the extent of love he has for his people. It therefore means that an assault on him is assault to the entire Igbo nation”  it said.

”Other Igbo in diaspora must take note of the threats of these miscreants masquerading as those fighting for the Igbo agenda and ensure that adequate security is provided in all genuine Igbo activities abroad” the group said.

They equally seek explanation from organizers of the celebration of the new yam festival which invited Ekweremadu to come and deliver a key note lecture, on why they failed to provide security for the former Speaker of the ECOWAS Parliament who was brazenly assaulted by the IPOB members.