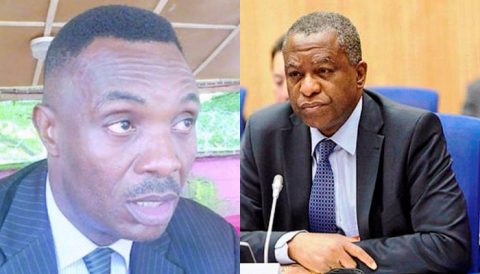 ENUGU NIGERIA, (AFRICAN EXAMINER) – The newly re-elected Chairman of the Enugu state chapter of the All Progressives Congress, APC, Dr. Ben Nwoye has raised the alarm over alleged plot by Nigeria’s Minister of Foreign Affairs, Geoffrey Onyeama, to kill him.

Sequel to this, Nwoye has called on President Muhammadu Buhari and the party to come to his rescue.

Addressing newsmen in Enugu Wednesday, Nwoye, who said he had uncovered a determined plot “by Nigeria’s Minister of Foreign Affairs, to kill him, using some compromised operatives of the Department of State Services, DSS.

Nwoye alleged that the attempt on his life was an aftermath of the recently concluded ward, local government and state congresses of the party where the Minister lost out completely.

He said: “I want to alert our dear President and indeed all Nigerians and other security agencies that the Minister of Foreign Affairs, Mr. Geoffrey Onyeama wants me dead for his selfish political ambition.

“He is currently working with some compromised operatives of the DSS in Enugu State to ensure that I was eliminated, the reason is that I called for his sack because of incompetency some time ago.

“During the State congress, he also brought a member of the PDP and wanted to make him state chairman but failed, he had openly declared that he was conducting his own congress against the party’s guidelines the electoral act; he also openly vowed to teach me a lesson and prove to me that he is a Nigerian politician,” Nwoye further alleged.

Nwoye recalled “on May 29, as Nigerians were celebrating Democracy Day, a faceless DSS operative sent me a text message, inviting me for questioning over what he called cases of malpractices during the APC congress.

“He said a petition was written against me by Okey Ogbodo and the Foreign Affairs Minister, and I want to make it clear that this is intended to drag me into the net of the DSS where they will kill me.

“I am saying this because during our state congress at the Nnamdi Azikiwe stadium, these same DSS officials supervised attack on us. Even when I drew the attention of one of them that my life was not safe, he said they have not received any order to act.

Nwoye, recounted how his driver and personal Assistant were brutalized by political thugs working for the Minister during the disrupted state congress of the APC on 19th May at the Nnamdi Azikiwe stadium, Enugu, under the watchful eyes of men of the DSS

“They supervised and joined thugs in beating to pulp my driver. But for the intervention of the police, we would have all been killed there, so, in all of these, the only people who have been professional is the police, and that is why I am raising this alarm informing President Muhammadu Buhari and the entire Nigerians that should anything untoward happen to me, the Minister and the DSS, especially those of them in Enugu North, should be held accountable.

“I have video graphic evidence of all their activities during our state congress. They supervised the attack and that is why they did not arrest a single person that is why till date no one is being investigated.” Nwoye stated.

The APC Chieftain who insisted that his life was in danger, because the Minister was determined to eliminate him, appealing to the President to as a matter of urgency to intervene to save his life.