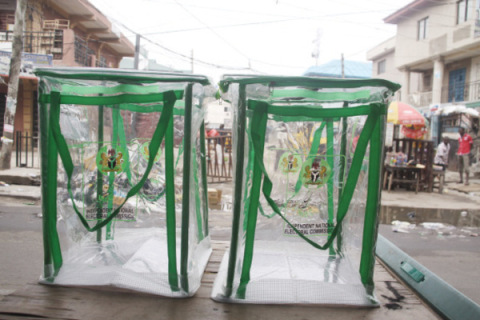 (AFRICAN EXAMINER) – Ahead of the November 4, local government election in Enugu state, Southeast Nigeria, the All Progressives Congress (APC) has warned the ruling People’s Democratic Party (PDP) and Enugu State Independent Electoral Commission (ENSIEC) against manipulating the polls, saying it would resist all  manner of electoral malpractices during the exercise.

APC, which is the major opposition party in the state handed down the strong warning weekend while flagged off its campaign for Enugu North senatorial district at Igboeze North council field, Ogrute.

African Examiner reports that the incumbent governor of the state, Hon. Ifeanyi Ugwuanyi is from the senatorial zone.

The state chairman of APC Dr. Ben Nwoye, gave the warning in his speech at the event which attracted a mammoth crowd, including some stalwarts of the party, such as its 2015 gubernatorial  candidate, Barrister Okey Ezea, immediate past Speaker of the state House of Assembly,  chief Eugene Odo, the Zonal Chairman for Enugu East senatorial zone, Anike Nwoga and his Enugu West counterpart, Ik Omenkukwu, former Commissioner for culture and Tourism, chief Jeo Mmamel, members of the state  working Committee SWC, among others.

He said APC was fully prepared for the council polls, hinting that the party has fielded chairmanship candidates in all the 17 council areas, as well as Councillorship for  the 260 political wards in the  state, stressing that the strategy of the party was on ground.

According to Nwoye, the party has begun serious  mobilization with a view to telling the Enugu electorates that APC is everywhere, adding that “this is the first time an opposition party is presenting candidates for all the 260 wards in the state, since the return of democratic rule in the country.

The chairman, said  the large crowd of people at the  campaign flag-off at Igboeze North LGA, the same with Udenu, the Governor’s home council, shows that the people are tired of PDP and their failed promises.

“But we want to make loud and clear to PDP and ENSIEC, that APC would not accept anything short of a free, fair, credible and transparent election, devoid of any form of manipulation or rigging.

Nwoye noted that for the first time since 1999, no PDP chairmanship or councillorship candidate would be returned unopposed because of fear of APC, declaring that the PDP lacks strategy hence, they have  resorted to propaganda by telling people not to come out on November 4 to vote as the results were already written in favour of the ruling party  candidates.

He however stated that  APC was holding Governor Ugwuanyi to his words that he would not interfere in the election in favour of the PDP candidates.

“I am happy that Governor Ugwuanyi told his PDP candidates to go and campaign. We believe every word from his mouth. If he has written results, he will not be campaigning. I believe he is a democratic man, I believe he will not interfere”.

Also speaking, Barrister Ezea, who hails from the senatorial district, maintained that the elections must follow the rules according to the Electoral Act, from distribution of electoral materials at ENSIEC to the polling stations, collations of results to the point where the results would be declared.

He said “If they do not want to hold the election, let them not hold it. But if they want to hold, it must comply with the Electoral Act”

Hon. Ogbonna Idoko,the APC Chairmanship candidate in Igboeze North, had while speaking with newsmen, said he joined the race with a view to correcting the anomalies of successive PDP governments if given the mandate serve.

The council boss hopeful, said the locality has been without good roads and other social amenities in spite of the huge federal government monthly statutory allocation coming to the area which according to him, is one of the largest council areas in the State.