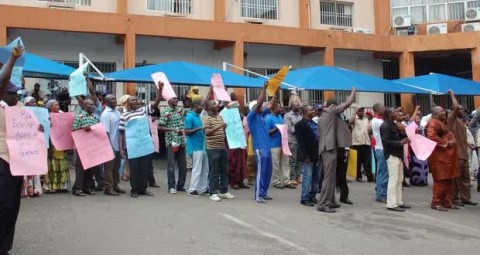 Members of the National Union of Electricity Employees, NUEE, in Enugu Electricity Distribution Zone, Monday threatened to embark on indefinite nationwide strike if their outstanding entitlements and other pending labour matters were not urgently sorted out by the new electricity managers in the area. 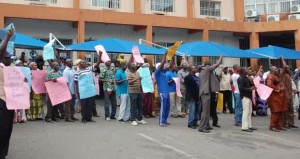 The aggrieved workers, numbering more than 100, had staged a peaceful demonstration in Enugu, an action that brought business activities at the Ogui Business Unit to a complete halt for several hours .

They had displayed placards with different inscriptions such as “Complete the payment of Severance Benefit to Staff”, “Pay us our 2013 bonus”, “Re-engage the disengaged  casuals”, “Anti-Union activities should be discouraged”, “Retirement benefits should paid to staff who retired before November 2013″ and “Pay death benefits to deceased families, our workers need protection” among others.

Addressing newsmen later, the workers, decried the non-remittance to the union the  check-off dues deducted from the workers” salaries for the months of November and December 2013 amounting to over N2 million by the new owners.

Secretary NUEE Eastern zone, Comrade Cyprian Ndubuisi Akoh, who spoke on behalf of the workers, condemned what he described as unfair treatment being meted out to the disengaged workers by the Federal Government.

The workers also alleged that the new management of the Enugu Electricity Distribution Company withheld the check-off for the two months, a development that has reportedly paralyzed the activities of NUEE in the zone.

They further alleged that the new owners paid November and December salaries to retained workers without their pay slips hence the workers could not know details of the amount paid to them as salaries.

The workers also lamented the non-payment of benefits to families of deceased staff in the Nigeria power sector.

They accused the government of reneging on the agreement it had with the electricity workers before the handover to the new investors, especially as it affects the settlement of the severance benefits.

They aggrieved workers however, warned that they might be left with the option of embarking on a nationwide industrial action since according to them, they have exhausted all necessary avenues of finding solution to the lingering and unfortunate development.