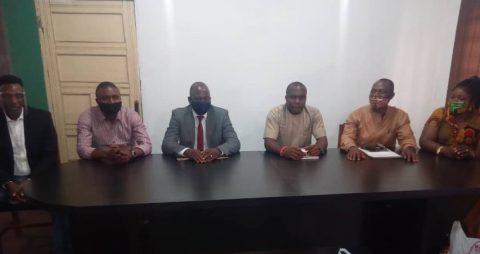 (AFRICAN EXAMINER) – The Enugu state chapter of the Inter-Party Advisory Council, IPAC, on Monday  elected  interim management executive committee members to pilot its affair, until a new election is conducted.

According to the association, the election became necessary following the de-registration of over 70 political parties by the Independent National Electoral Commission, INEC in February this year, saying  it was done to fill some of the vacant positions occasioned by the de-registration

Addressing newsmen shortly after the poll held at the state Secretariat of the organization, the newly elected chairman Barrister Ken Ike, of the Allied Peoples Movement (APM) described the exercise as very peaceful, stressing that it was done without any form of rancour or acrimony .

He said: “It was a directive of the national leadership of IPAC to streamline elective positions in the organization after the deregistration of 74 political parties by the INEC on the 6th of February, 2020, adding that the association decided to hold the election today, after notifying INEC and security agents.

The new Enugu IPAC boss said  “there was a need to fill the gap created by the deregistration.

“So, IPAC Enugu State issued notice of this meeting to all the registered political parties.

He disclosed that “Out of the 17 political parties that are operational in Enugu State, 16 participated in the election. It was also monitored by the INEC and relevant security agencies. We were able to harmonize and elect the new leadership.

Ike declared that “this election is an opportunity for everyone of us to contribute his or her quota for the promotion of the concept of  good governance and democracy in Enugu State.

“Myself and members of my executive will not let the people down in this onerous task, we are going to do our best. Though, it’s a challenge, we are not going to let our members down” the chairman stated .

He hinted that  the exco, which will operate as an interim State Management Committee, would function till when a national election is conducted .