Enugu PDP To Anglican Bishops: Too Late To Complain About Catholic/Catholic Guber Ticket 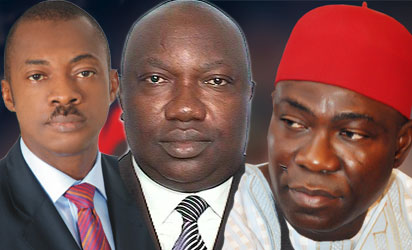 Ignatius Okpara, Enugu – The Enugu state chapter of the ruling peoples Democratic party, PDP at the weekend declared that the request for an Anglican Deputy governor slot recently made by leaders of the church in the state was belated.

African Examiner reports that Anglican Bishops in Enugu state had last week during a media briefing, took exception to a Catholic/Catholic ticket by the state PDP in 2015.

They had argued that since the gubernatorial candidate, Hon. Ifeanyi Ugwuanyi, is a Catholic, it would have been proper for the party to pick an Anglican as his Deputy, in the spirit of justice, equity, and fair play.

Commenting on the issue on Saturday during the Correspondent Chapel of the Enugu state chapter of the Nigeria Union of Journalists, (NuJ) end of year party, state chairman of the PDP, chief Ikeji Asogwa, said the church request came to them when it was belated.

According to him, picking a running mate of a governorship candidate of a party is a serious business, involves a lot of consultation, and goes beyond weeping of sentiments by any body or group.

He explained that apart from the fact that the party had already picked the running mate of its candidate before the Anglican church made their request, such position are not be based on religion.

The party Asogwa said, is only interested and committed in producing leaders with integrity that will deliver the goods, irrespective of religious affiliation.

The state PDP boss however, disclosed that already, the party had forwarded name of a member of the State House of Assembly, representing Udi state constituency, Mrs. Cecilia Ezeilo, to the appropriate quarters as the running mate to the party’s gubernatorial candidate.

Mrs. Cecilia Ezeilo is a member of the Roman Catholic faith.