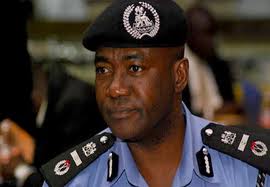 The Enugu state commissioner of police, Abubakar Adamu Mohammed, says Leader of the Biafra Zionist Federation, BZF, Barrister Benjamin Onwuka and 12 members of his group arrested last week over a failed attempt to seize the Enugu State Broadcasting Service, ESBS, have been transferred to the Force Headquarters, in Abuja for further investigation.

Mohammed, who drooped the hint in Enugu friday said after the arraignment of the suspects they were moved to Abuja where they are presently undergoing further questioning.

African Examiner recalled that Onwuka and members of the pro-Biafra group had in the early hour of Thursday,  June 5, 2014 invaded the premises of Enugu state government-owned  radio station in an attempt to make a broadcast of their intention to re-awaken the defunct Republic of Biafra.

Regrettably, a police sergeant (name withheld) and a BZF member were shot dead during the incident while 13 members of the group were arrested by the security operatives.

The Enugu police boss, had while parading the  members of the pro-Biafra group before newsmen, said  the mission of the invaders was to take over the government of Enugu State and cause crisis in the state.

Commissioner Mohammed who gave an insight to what the group did at the station said: “When they went to the ESBS, they got entrance into the studio and wanted them to give them access to make a live broadcast to the people of Nigeria.

“In the broadcast, they have a CD rom where the details of what they wanted to tell members of the public was saved.”

“They made a summary of it in a sheet of paper and the highlight of it  are; an appeal calling for all boys in Obiagu to come out, all boys from Ogui to come out, all  boys in Enugu to come out; they also asked  students, people with Keke Napep to come out. They wanted to order all businesses closed, all schools to be closed, all markets to be closed and all government officials to surrender all property in their possession before midday. You can see these people were in a mission of trying to overturn the government and it is something that we will never tolerate”.

“Recall that in March this year, they had attacked Government House, Enugu.  We had earlier declared their leader wanted.

“The same group of  Biafran Zionist Federation led by their leader, Benjamin Igwe Onwuka invaded the Enugu State Broadcasting Service with the intention  that after the broadcast, they will set the place ablaze. the CP alleged