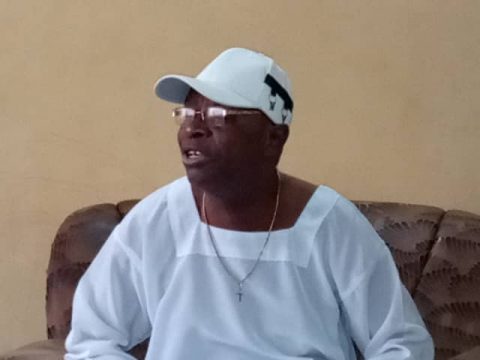 …Declares Buhari, Atiku Not The Messiah

ENUGU, NIGERIA (AFRICAN EXAMINER) – Fiery Enugu based Prophet, Anthony Nwoko has descended on Nigeria’s religious and political leaders, accusing some of the clerics of voicing out fake favourable prophecies to politicians for their selfish and personal gains.

He said the so-called clergymen, have done more harm than good to the nation’s economic and political spheres, because “they always sing the praises of politicians, and tell them what they want to hear, and not what they are not getting right.

Addressing a press conference in Enugu Monday on the state of the nation, during which he gave his new year massage, Prophet Nwoko, insisted that most of the prophecies recently pronounced by some Nigeria’s religious leaders on the 2019 general elections and some political party’s  candidates,  were fake and should not be taken seriously by Nigerians.

He stressed the need for Nigeria as a nation to rise up and embrace God and his light, which he claimed emanates from the Eastern part of the country, pointing out that the citizens are suffering today because the political leaders have been practising  democratic system of government against the will of God, which “has brought suffering, poverty, corruption and killings in the land.

“The Lord Almighty has come with authority and power to sanitize this nation full of witches and wizards, workers of iniquity right from the House of God. The religious leaders have failed this nation woefully. I can’t find any man of God that has come to make sure that this nation stands.

“All we have are workers of iniquity in the vineyard. They go on flying their helicopters and private jets in the name of Jesus, but this year, 2019, God is set to take over His home. He will take over His vineyard and His property from these people because they have failed the nation and failed heaven.

“If the religious leaders are not ready to set this nation free, God will punish them. God will make sure that the sword from heaven will touch all of them. They have eaten a lot from the House of God.

“Enough is enough. I don’t need anything from anybody, what I want is for this nation to gather together and move forward, adding that neither president Buhari, nor ex- vice president, and Peoples Democratic party PDP presidential Candidate, Atiku Abubakar, has the answer to Nigeria’s problem.

“We can’t continue with evil mention and women. Any man of God who did not speak the mind of God during his new year prophesy is fake. There is not light in most of them. As at now, no man of God has spoken about the glory and the light of God which is from the East. They are all fake. The lying spirit in them has contributed to the downfall of this nation.

“Tell all the religious leaders in Nigeria, people like Rev. Fr. Mbaka who said that President Buhari is the one to deliver this nation, that he should relocate to Katsina from where he will be speaking for Buhari. If he refuses to listen, the wall of Jericho will fall in the Adoration Ministry.

“Bishop Emmanuel Chukwuma (The Ecclesiastical Bishop of Enugu Diocese of the Anglican Communion) said that Governor Ifeanyi Ugwuanyi is the Joshua of today, but he refused to see that the glory of God is from the South East. Tell Chukwuma that they have not seen the glory of God because of jealousy and envy.

“Nigeria wasted 20 years since 1999 practicing democracy which was annulled in 1993 by angels of God. They said that without democracy they cannot survive. But today, they are suffering, there is hunger in the land, there is crisis, there is corruption, there is killing and there is Boko Haram. It is only the Glory that can stop Boko Haram in Nigeria.

He however said that for Nigeria to know peace and reach its potentials, it must accept the glory of God which is revealed through him by a divine mandate to liberate the country.

“The world is suffering because of this glory that has been concealed. The heaven has done everything possible to hold on to this glory since the year 1985 but today, the hour has come. Nigeria will have peace, Africa will have peace and the world will have peace because the prince of peace is here with a divine mandate to deliver his people.

On the proscribed Independent peoples of Biafra IPOB, Nwoko, advised its members to trade with caution, saying its leader, Nnamdi Kanu, is only misleading  them, and using the platform to enrich himself.

“I am ready to die for this mission, i will continue until my people are set free. God’s glory is here, this is not the glory of Nnamdi Kanu or Atiku Abubakar, neither is it the glory of Muhammadu Buhari. It is the glory of God that has come to liberate my people’’ said the cleric..