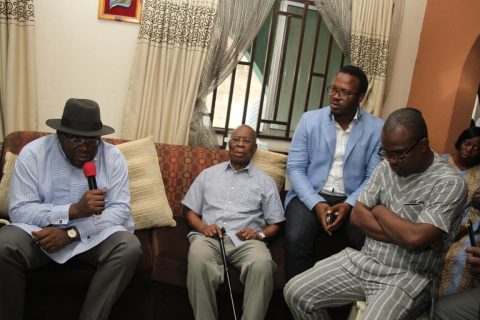 BALTIMORE, MD (AFRICAN EXAMINER) – Governor Seriake Dickson of Bayelsa State on Monday, condoled with Chief Brown Etonye and his family over the death of his son, Pastor Barr. Tamarakuro Etonye at his residence in Port Harcourt, Rivers State.

Describing the death of Pastor Etonye as sudden and unfortunate, Governor Dickson said on behalf of the government and people of the state, he decided to stop over on his way from Abuja to identify with the bereaved family in its moment of grief.

The Governor who prayed God to provide succour to members of the Etonye family, urged them to follow the example of Job in the scriptures whose faith in God remained unshaken when he lost everything.

According to Governor Dickson, he shares in the pain the Etonye family is passing through and no one can question God on what has happened since He is the one who giveth and taketh.

He prayed God to give the bereaved family the fortitude to bear the irreparable loss and grant the soul of Late Pastor Etonye eternal repose.

“We all feel this pain. We feel this irreparable and irreplaceable loss. Who are we to question God. It is God who giveth and taketh at His own time and for His own reasons. We are consoled and we also pray that the spirit of God should console the family particularly the father, Chief Brown Etonye.

“These are times to reflect on what the patriarchs went through especially Job who lost all he had in one day and yet he refused to curse God. His abiding faith in God never wavered. But our God is a comforter and He will comfort the Etonye family over the demise of their loved one.” Governor Dickson prayed.

Responding, a member of the deceased family, Mr. Osese-Poweido Etonye, described Pastor Tamarakuro’s death as a tragic loss and expressed appreciation to Governor Dickson for identifying with them in their moment of sadness.

Late Pastor Barr. Tamarakuro Etonye was survived by wife and children as well as an aged father and siblings among whom is Mr. Richie Etonye, an Accountant in Government House, Yenagoa.