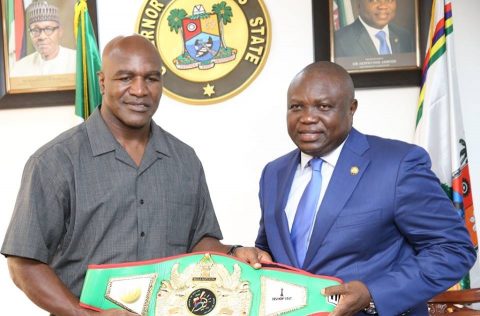 LAGOS, NIGERIA (AFRICAN EXAMINER) – With a donation of $3million to purchase health equipment for the State, Governor Akinwunmi Ambode of Lagos has hailed the achievements of five-time world cruiserweight and heavyweight boxing champion Evander Holyfield.

Ambode made the disclosure Wednesday, at Lagos House in Ikeja while playing host to the boxing legend who was on courtesy visit and be part of the ongoing 50th anniversary of the State.

While describing Holyfield as the greatest living boxer of all times, the Governor said he was personally proud of the achievements of the legend in the boxing field and described him as a great role model.

The boxer who is billed to be in the ring with a former State Governor and National Leader of All Progressives Congress (APC), Asiwaju Bola Ahmed Tinubu at an exhibition boxing match, is in Lagos as part of activities marking its Golden Jubilee anniversary.

The Governor, who described the visit of the prominent boxing to Lagos as historic, said there was no better way to showcase sports as catalyst for growth than the collaboration of such an icon as Holyfield.

“This is exciting and historic moment for us coming at a time Lagos is celebrating the 50 years of its establishment and we want to say a big thank you to Holyfield for collaborating with us to put this as part of events marking the Golden Jubilee anniversary of Lagos State.

“We believe strongly that in all sectors that we have tried to celebrate Lagos, this is one momentous topic that we really mean to celebrate. As a government, we have always wanted to use sports as a way of driving our economy and there is no way we can showcase sports as the catalyst for economic growth than bringing somebody who is a champion; a revered person and for him to use his God given talent and resources to promote sports in our State,” Governor Ambode stated.

While noting the vision of the Evander Holyfield Foundation to nurture young stars and future boxers, as well as the issues relating to promotion of health and wellbeing of the people, Governor Ambode pledged to partner with the foundation to ensure that the set objectives are achieved, especially with regards to the people of the State.

The Governor again described Holyfield as the living greatest boxer of all times, a sport icon and a champion who he is proud of his achievements, adding that the visit to Nigeria would also be used to trace the roots of the boxer back to Lagos.

“I love the concept that you want to pay back and that is the essence of leadership which is to be able to touch humanity. There are very many people that go away from their stardom and not pay back and so many champions have not been able to do anything after leaving the ring but Holyfield stand as an exception.

“On the other side, boxing should now be in the front burner of sports in Nigeria especially now that a Nigerian, Anthony Joshua recently won as the unified world heavyweight champion.

“Lagos has the largest concentration of the black people in the world and we just believe that Lagos should be well projected the visit by the boxing legend is also to promote the brand called Lagos,” Ambode restated.

Holyfield in his address said he was in Nigeria to give back to the society having achieved so much in life especially in boxing.

While recalling how he started boxing at the young age of 8 and became champion at 9, Holyfield said he felt like quitting after initially suffering defeats but his mother told him to hang on.

“I became the person I am because I listened, I followed direction and I did not quit even when I lost. In giving back to the society, I am here to say I got a Real Deal Promotion. We are looking for young fighters who want to listen and follow instruction.

“This is about giving back to the society. I want kids to learn from me how I became four times heavyweight champion,” Holyfield reiterated.

Governor Ambode commended Holyfield’s huge donation and urged other sports legends and individuals to emulate him.