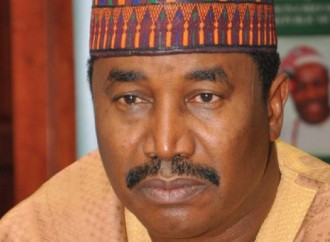 Ekiti State Governor, Mr Ayodele Fayose has described the trial of former governor of Katsina State, Ibrahim Shema by the Economic and Financial Crimes Commission (EFCC) as mere political persecution, which is part of the plot of the cabal in the All Progressives Congress (APC) to incapacitate opposition figures in the country financially before the 2019 general elections.

Governor Fayose, who said President Mohammadu Buhari’s second term ambition will not be realised on the basis of intimidation, harassment and persecution of opposition figures as well as annihilation of their financial strength, added that; “Instead of running after those that they perceived as threat to the President’s 2019 ambition, they should rather save Nigerians from hunger and sufferings now ravaging the land.”

According to his Special Assistant on Public Communications and New Media, Lere Olayinka, Governor Fayose said “it is also obvious that those holding power in Katsina State presently are finding it difficult to match Shema’s unprecedented performance while in office and have opted for his persecution just to cover up their failure.

The governor lamented that all actions of the APC led federal government were geared towards the achievement of President Buhari’s second term and not the well-being of Nigerians, many of whom can barely feed owing to bad policies of the government.

He said “it is another sad experience in democratic governance in Nigeria that someone like Alhaji Shema, who performed remarkably well as Katsina State governor and even left over N3 billion in the state’s treasury is now being humiliated ostensibly just because some people believed that the only way they can perpetuate themselves in power beyond 2019 is by destroying opposition.

“Despite that Alhaji Shema made himself available to the EFCC on September 16, 2016, he was kept in detention for more than two weeks just to humiliate him as directed by those who presently hold power in Katsina and Abuja. Even when Alhaji Shema was arraigned in court on Tuesday, EFCC even went to the extent of asking the court to remand him in prison. This is ridiculous!”

Calling on the international community, especially the United States of America (USA) President-Elect, Donald Trump and other world leaders to help in saving democracy in Nigeria, Governor Fayose said, “this continuous use of EFCC and other agencies of the federal government to humiliate and oppress those perceived as threat to the APC hold on power beyond 2019 is a threat to democracy in the country and must not be allowed to continue.

“The international community should ask President Buhari why only opposition figures are the ones being arrested and tried by the EFCC. What has happened to all those petitions submitted to the EFCC against close aides of the president and serving members of his cabinet?

“Obviously, EFCC now exists as the APC Economic and Financial Crimes Commission and those foreign organisations donating funds to the commission should be mindful of their funds being used to persecute opposition.”