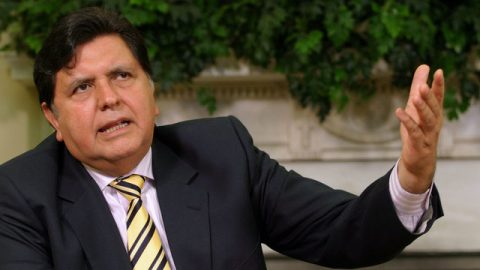 (AFRICAN EXAMINER) – A Former Peruvian President Alan García has died hours after shooting himself as police arrived at his home to arrest him over bribery allegations.

Garcia’s death was confirmed by the incumbent President Martín Vizcarra.

In a post from his Twitter handle, President Vizcarra said he was “shocked” by the former President’s death and sent his condolences to his family.

Earlier, the late Peru’s Leader was rushed to hospital in the capital, Lima.

A crowd of supporters had gathered outside the hospital and were held back by a line of police.

Mr García was accused of taking bribes from Brazilian construction company Odebrecht. He had however denied the allegations.

Security operatives were sent to arrest him in connection with the allegations.

Interior Minister, Carlos Morán told reporters that when police arrived, Mr García requested to make a phone call; went into a room and closed the door.

Minutes later, Moran narrated a shot was heard, prompting the police to force the door open and found Mr García sitting on a chair with a bullet wound to his head.

Late García underwent emergency surgery in the Casimiro Ulloa hospital in Lima, but to no avail.