Exclusive – 2015: Dariye Set To Decamp From Labour Party To PDP

As 2015 election draws near, reports indicate that the immediate past Governor of Plateau State and Senator representing Plateau Central Senatorial District, Senator Joshua Dariye is set to rejoin the People’s Democratic Party (PDP). 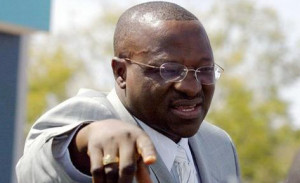 Sen. Dariye was Governor of Plateau State between 1999 to 2007 under the platform of the PDP, but dumped the party for the Labour Party prior to the 2011 polls.

The Lawmaker has however been making frantic efforts to return to the PDP since the influence of the LP within the State appears to have fizzled out.

Many believe his action is an indication that he wishes to re-contest for the Plateau Central Senatorial seat.

African Examiner’s investigation revealed that the senator has written a letter to the Plateau State PDP Chairman notifying him of his intention to return to the party.

And that his decision to dump the LP which brought him to the Senate was because he was a founding member of the PDP.

African Examiner also gathered that the National Chairman of the party, Alhaji Ahmadu Mu’azu, who served as the Governor of Bauchi State at the same period as Dariye is helping to facilitate his return to the PDP.