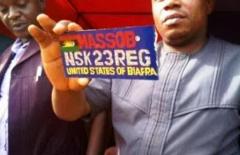 (AFRICAN EXAMINER) – There are indications that some unnamed Traditional rulers who recently joined the Movement for the Actualization of the Sovereign State of Biafra, MASSOB, in Enugu North senatorial District, may soon be sanctioned by the state government, African Examiner has gathered.

The leadership of MASSOB in the said district where the incumbent Governor of the state, Hon. Ifeanyi Ugwuanyi hails from, recently revealed that some traditional rulers from the zone have officially registered with the pro-Biafra group.

Leader of Biafran Independence Movement, BIM, in Enugu North zone, Chief James Omeke, had during the mobilization and sensitization of new members from Igbo Etiti revealed that their numbers are rising on daily basis.

He disclosed that the new members, including the monarchs were lectured that non-violence would earn them their sovereignty.

However, African Examiner’s  correspondent learnt from a source close to the state ministry of Chieftaincy Affairs who craved anonymity, that the Commissioner in charge of the ministry will soon investigate the alleged involvement of  monarchs in MASSOB activities, with a view to sanctioning them.

Omeke, hinted that the regional administrator of Igbo Etiti, Jude Elugwu with other members travelled the entire Igbo Etiti to sensitize people and recruit new members.

“We see the recent mobilization and sensitization of people of Igbo Etiti region as very successful as we now have in our fold traditional rulers and about 200 new committed members enlisted into MASSOB-BIM.

“I cannot reveal the identity of the traditional rulers because it is not in my power to do so, our national leader, Chief Ralph Uwazuruike will do that when the time is ripe” Omeke stated.

“We told them that our national leader, Chief Ralph Uwazuruike had taken the matter up to the level of United Nations (UN), intimating them of his plans to carve out Biafra from Nigeria.

“The mobilization of new members witnessed a large turnout of people from twelve villages.

“We conscientised our new members on why MASSOB-BIM remained non -confrontational, we told them how we intend to actualize Biafra without a single gunshot. Our message to them is Biafra, our weapon, is non-violence.” Omeke said.

Meanwhile, African Examiner reliably gathered that some of the traditional rulers who joined the group are already panicking over the proposed government investigation.