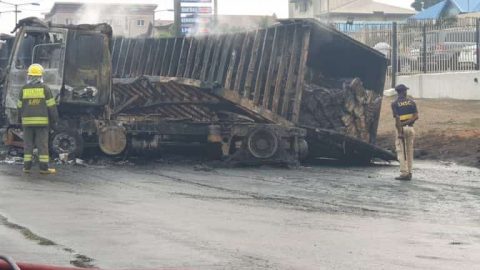 (AFRICAN EXAMINER) – An head-on collision between a 40feet container truck and a petrol tanker has resulted into an explosion on the Otedola Bridge along Lagos/Ibadan expressway on Saturday.

The accident occurred at 2.00 a.m. when the 40fit containerised truck, loaded with fabric, had a brake failure while moving inward Berger.

In the process, the truck collided with a tanker loaded with 33000 litres of PMS.

The impact of the collision resulted in a fire explosion.

“On arrival at the incident scene it was discovered that a 40fit containerised truck loaded with fabric had a brake failure while moving inward Berger.

“The truck collided with a tanker loaded with 33000 litres of PMS (petrol) while the impact of the collision resulted in the fire outbreak.

“No casualty was recorded.

“However, the fire affected the 40ft containerized truck and high tension wire at the spot.’’ Oke-Osanyintolu told NAN.

He advised commuters to take the Ojota or 7UP exits until the backlog of traffic eases.

The LASEMA boss said that the damping down has been concluded while the agency’s equipment would remove the vehicles from the thoroughfare.

A resident of the area, Mr Johnson Adeoye, told NAN that the tanker lost control and rammed unto a trailer with the container.

Adeoye said that upon the crash, there was fire outbreak which led to the explosion.