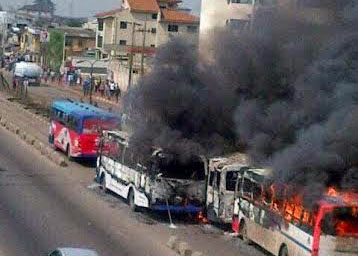 On July 4, scores of soldiers unleash mayhem on passers-by and motorists on Ikorodu road and succeeded in burning about 11 BRT buses after a soldier riding a motorcycle was killed by a BRT bus.

The 3-man tribunal is headed by Retired Justice Ebenezer Adebajo, while others members are Nurudeen Ogbara and Jude Igbanoi as Ms Oludamilola Kesington serves as the Secretary of the tribunal. 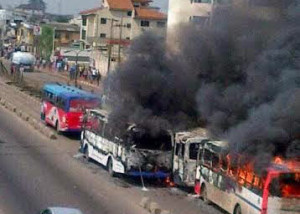 Inaugurating the tribunal at the State House, Ikeja on Monday, Fashola decried the bad image the Nigerian Army had acquired in recent time, saying that some unscrupulous elements had earned the military such bad reputation.

“It is not just the situation like Nigerians Airways that have failed; our nation is now listed as one that may potentially fail. We are not the only nation that can fail, any nation can fail. Any nation will fail if its people failed to do the right thing.

“Ancient Rome, one of the leaders of modern civilization failed. But they gave us the most enduring legacy, the common law. But the reason they failed was that they turned their back on the law. Societies and institution will fail, if men and women fail to do nothing.

“Like the Nigerian Airways which was the symbol of our pride in 1973 the Nigerian Army was symbol of pride to this nation. This army helped in many conflict regions across Africa. At home unfortunately, some members of the institution have diminished its reputation lately. There are some of them who are responsible because there are officers and gentlemen of the Nigerian Armed Forces.

“Unfortunately, on the July 4, 2014, the tragic death of a young soldier was compounded by destruction of buses. There are many questions that arise. Will the soldiers do this? And if not, who did? I think it is important to note that if it was not the soldiers, Nigerians should know and help maintain and sustain its reputation and help reinforce the trust the Nigerian People have in the Nigerian Army,” he stated.

He said the tribunal is to find out “who died, what killed him and how and why did he died. And what could have been done to avoid the kind of accident that took his life. This and many others are the question that I hope that this tribunal to be chaired by Justice Ebenezer will help unravel and explain to Nigerians.”

Fashola said it was also important to know if there were other people behind the mayhem, saying that Nigerians, especially residents of Lagos would like to know, adding that he had received some representations from the Nigerian Army, which was the base on which “I sort the Attorney-General and Commissioner for Justice’s advise, who advised that we set up the panel of inquiry. We also received representation from the bus owners.  I hope that you will be able to conclude your findings within 60 days.”