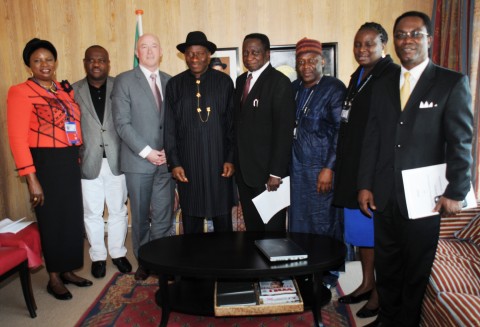 President Goodluck Jonathan said Sunday at The Hague that the Federal Government has earmarked one billion U.S Dollars for the implementation of a comprehensive programme to check crude oil theft, the vandalism of oil and gas infrastructure, and the apprehension and prosecution of crude oil thieves. 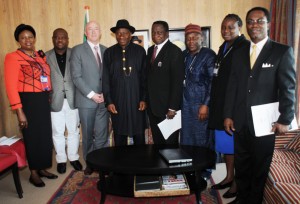 President Jonathan in the Netherlands

Speaking at separate meetings with the Prime Minister of the Netherlands, Mr. Mark Rutte and the Chief Executive Officer of Shell International, Mr. Ben van Beurden, President Jonathan said that a technical committee has already been set up to look into all aspects of the implementation of the programme.

This, the President said, will include further action to enhance the security of pipelines and other oil industry infrastructure, resolve community-related issues, boost youth empowerment in oil-producing areas and enhance the commitment of oil companies to the discharge of their corporate social responsibilities.

President Jonathan said that the fresh onslaught against oil theft planned by his administration will require the maximum co-operation of the international community, especially countries like the Netherlands which are major stakeholders in the global oil industry.

“Oil theft is an aspect of global terrorism, which has become a big industry on its own. It has become a major threat to the Nigerian economy and we need to work with all stakeholders to curb it. The thieves must be traced, apprehended and prosecuted”, the President who is in the Netherlands for the 2014 global Nuclear Security Summit said.

The Dutch Prime Minister assured the President of the commitment of the Netherlands to concerted action against crude oil theft and global terrorism.

Mr. Rutte who remarked that President Jonathan’s visit affirmed the strong ties between Nigeria and the Netherlands, also assured the President of the willingness of The Netherlands to collaborate more with Nigeria on environmental and security issues, particularly in the Niger Delta.

He praised Nigeria’s leadership role in promoting regional security in West Africa, and welcomed the signing of an agreement on immigration between both countries as well as the strong trade relations between Nigeria and The Netherlands.

“The President’s visit is an open testimony of the strong ties between Nigeria and Netherlands. Nigeria is Netherlands’ main trading partner in Africa and the Netherlands is the second biggest European investor in Nigeria,” the Dutch Prime Minister said.