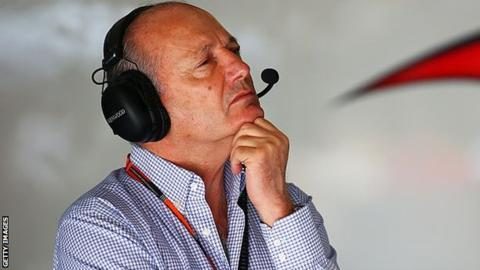 BALTIMORE, MD (AFRICAN EXAMINER) – Ron Dennis has ended his 35-year tenure as the boss of McLaren.

The 69-year-old Dennis, quit Tuesday, after being told by fellow shareholders that he must give up his position as the Chairman and chief executive of McLaren Group.

Reluctant McLaren boss failed last week in a High Court, in his bid to prevent him being put on ‘gardening leave’.

In a statement, Dennis said he was “disappointed” and called the grounds for his removal “entirely spurious”.

Dennis has been on the boards of McLaren Technology Group and McLaren Automotive. He retains significant shareholdings in both firms.

He owns 25 per cent of McLaren Group, Bahrain’s Mumtalakat investment fund; 50 per cent and the remaining 25 per cent is held by his long-time business partner, a Saudi-born Frenchman, Mansour Ojjeh,

The duo who was the chief executive of the TAG Group, fell out some years ago and the 64-year-old Ojjeh put up with the Bahrainis in trying to remove his former friend.

It was felt Dennis’ autocratic style was ill-fitted to growing McLaren in the future.

Dennis said the other main shareholders “forced through” the decision “despite the strong warnings from the rest of the management team about the potential consequences of their actions on the business”.

“My management style is the same as it has always been and is one that has enabled McLaren to become an automotive and technology group that has won 20 Formula 1 World Championships and grown into an £850m-a-year business’’ Dennis boasted.

“Ultimately it has become clear to me through this process that neither TAG nor Mumtalakat share my vision for McLaren and its true growth potential.

“My first concern is to the business I have built and to its 3,500 employees. I will continue to use my significant shareholding in both companies and my seats on both boards to protect the interests and value of McLaren and help shape its future.

“I intend to launch a new technology investment fund once my contractual commitments with McLaren expire’’, Dennis hinted.